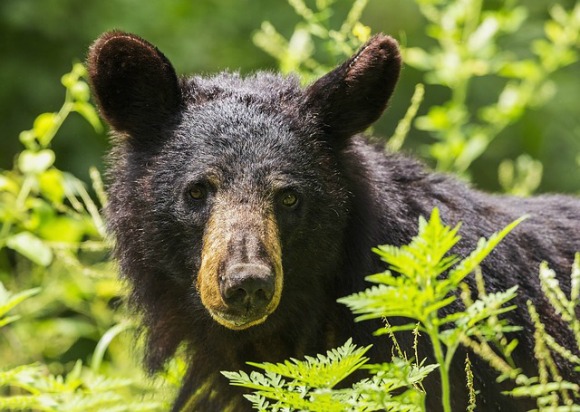 This isn’t to say that you’re likely to run into many bears, in fact quite the opposite. Most bears will avoid humans if they hear us nearby. However, bears are wild animals and can be unpredictable. Part of hiking in bear country is knowing how to stay safe while protecting yourself and the bears.

You’re probably wondering why I’m talking about protecting the bears. You know all those signs you see that say something along the lines of “A Fed Bear is a Dead Bear”? Those signs are there to let you know that you must be very aware of not letting any of your food or food waste (trash, wrappers, crumbs, etc) get left behind. Bears are omnivores and have an extremely keen sense of smell.

They are attracted to the smell of human food (and things that we use to prepare food – even things like lotions, sunscreens, and bug sprays.) And if they start to pursue and eat human food – they become acclimated to humans. Bears are often relocated or killed if they begin to be a nuisance to humans in parks or campgrounds. Nuisance bears are one step away from aggressive bears.

Being vigilant with your food while hiking will help to protect both you and the bears!

Before you begin your hike – the most important thing to do is learn more about bears. You’re very unlikely to encounter a grizzly/brown bear in the Southwest so we’re going to talk about the kind of bear found here – the black bear. Brown bears and black bears look and behave differently so it’s very important to understand the differences between them.

This is a brown or grizzly bear. Grizzly bears are not always brown and can range in color from black to blonde. Notice the hump on the back and the wide muzzle. They also have rounded ears and long, light colored claws.

These bears are primarily found in coastal or mountain forests. Grizzly bears simply aren’t found in the Southwest anymore. I picked up a brochure about bears at the campground we stayed at in Greer last summer and it had a story about the last grizzly bear in Arizona being killed sometime in the 1930’s by a Forest Service ranger. 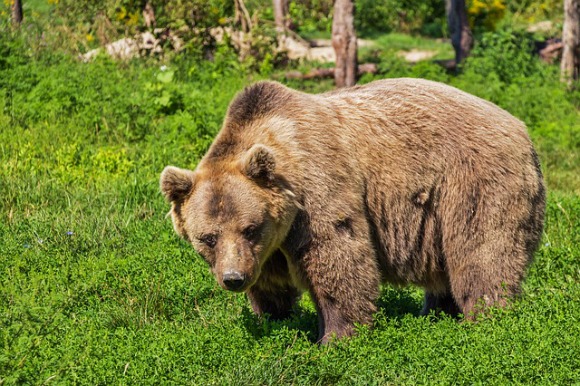 This is a black bear. Being called a black bear is sort of unfortunate because they are often NOT black. They can be found in shades of black, brown, cinnamon, blonde, blue-gray, and white.

Black bears have taller ears and no shoulder hump. They have a straighter face than a grizzly bear (often called a Roman nose) and have short, dark colored claws. The easiest way to tell the bear types apart is the height and shape of the ears and the shape of the face. And if you can see the feet – look at those claws too. 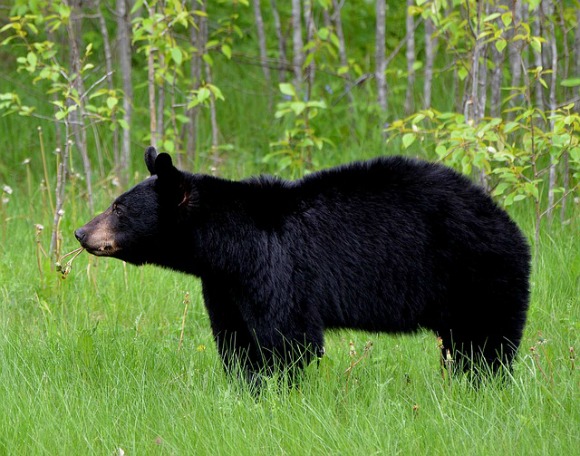 Black bears are excellent climbers. When a black bear feels threatened he usually runs or climbs a tree. Black bears are less likely to defend themselves when threatened than grizzly bears are. This is why you must understand the difference between the two. We’ll talk a bit more about this in a second (find it in the “Seeing a Bear While Hiking” section below.)

Here are a few excellent articles that describe a bit more about bear behavior. I highly recommend you read through them.

I like to say that after education comes preparation. While you are hiking – here is a list of best practices. These are easy things to remember and follow.

I’ve been not so sure about carrying bear spray for quite some time. It felt unnecessary and clunky. However, after doing a bunch of reading to make sure I understood bears – I’m a new believer. We’ll be taking two canisters along the next time we head out to bear country – one for myself and one for my husband.

As it turns out, if you do end up in a worst case scenario (like encountering an aggressive bear) the outcomes for hikers who carried bear spray were far better than for those who carried guns or nothing at all. While shopping for bear spray – the most important things to remember are that it should be EPA-approved and made specifically for bears. With most canisters running around the $40 mark – it seems well worth the price for the peace of mind.

For more information on how to use a bear spray canister safely and effectively – check out this page with an introductory video.

Don’t hike alone. You’re at an advantage if you encounter a bear with more people. You look bigger in a group. You will also be able to make more noise.

Hiking in groups is not only good for bear safety – it’s also just a great practice for general safety while hiking.

Bears tend to avoid noise. The worst thing you can do is to hike silently in bear country. If a bear can hear you coming – they’ll move away to avoid you.

This is an easy one for my loud family of five – we’re never quiet. In fact, last summer we encouraged our girls to sing while we hiked.

Hiking in bear country is not the right time to have your headphones on. Pay attention to your surroundings. This is also great advice for rattlesnakes. Many wild animals will strike or fight back if they’re startled. If you see them first, you’ll be able to avoid them entirely.

Whatever snacks you bring in with you should be brought back out with you. This includes trash, crumbs, stray bits of food. Leave no smelly food type items. In fact, it’s a great idea to take your snacks out of their original packaging and secure them in plastic. This reduces the amount of trash you’re dealing with and allows you to pack more in less space and it also keeps smells down while you hike.

Bears do not like dogs. So much so that they can cause bears to behave more aggressively than they would have if you hiked with just people. But if you’re like us and enjoy bringing your canine friends along – make sure your dogs are leashed and in control at all times.

If you see an animal carcass on a trail or you see vulture or other birds circling something up ahead – take an alternate route or turn around. Best to avoid causing a bear to protect a kill they’re working on.

If you see visible bear sign while hiking – things like scratches on trees, scat, torn up vegetation, berry bushes with damage – take an alternate route or turn around. If you don’t, you mind end up inadvertently surprising a bear on the trail.

Bears are active from dusk to dawn, but tend to be most active in the early morning and late afternoon. If the length of your hike will allow it – try to avoid these times of higher bear activity and hike mid-day. 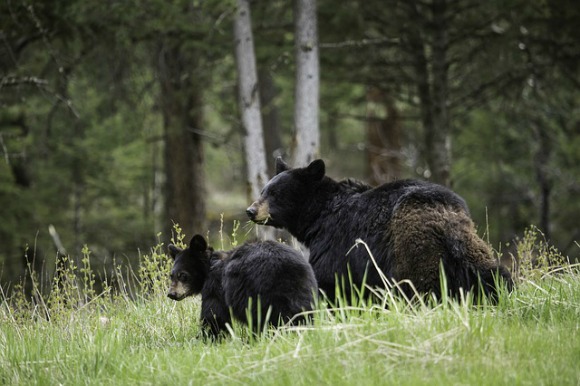 Seeing a Bear While Hiking

If the bear doesn’t see you…

If the bear hasn’t seen you or isn’t paying attention to you – congratulations! That is a very exciting thing to see! Always remember to give a bear space (200-300 feet minimum). Take a picture, but do it quietly and from far away.

Give the bear plenty of space as you pass by – never go in closer. Bears are very fast runners so you’ll want to keep that bear as far away from you as possible.

If the bear does see you…

If the bear has noticed you and is paying attention to you – it’s the time for caution. Remain calm and ready your bear spray just in case you need it. If you’re hiking in the Southwest – know that you’re very likely seeing a black bear. Try to notice if there is food present by the bear or cubs nearby.

Pick up small children and try to make sure your dogs are quiet. Do not climb a tree or scream and run. Stand still while you talk calmly and wave your arms slowly so the bear will know you are a human. The bear may stand on its hind legs to get a better look at you. Standing bears are usually curious, not threatening.

If the bear begins to feel threatened…

If the bear has begun to feel threatened and starts to act aggressively, it may pop its jaws or swat the ground with its front paws. It may blow and snort and lunge or pretend to charge you in order to get you to leave. Stand your ground and use a calm voice (do not scream). If the bear stops, move away slowly sideways (bears do not view this as threatening). Get as far away from the area as possible.

If the bear begins to charge…

If the bear begins to charge (this is very rare and usually is a bear defending food or cubs) – use your bear spray. Point the nozzle at a point above the bears head so that the stream will fall down into the bear’s eyes, nose, and mouth. You’ll need to do this at fairly close range (20-30 feet is ideal). This should make the bear run away.

If the bear attacks…

If the bear begins to attack (the bear makes physical contact) and you’re too close to use your bear spray AND the bear is a black bear (never try this with a grizzly bear) – make yourself as large as possible and yell loudly. DO NOT PLAY DEAD. You’re trying to scare the bear away. Use any object you can find to hit or fight back concentrating on the face and eyes.

The thing to remember is that these are worst case scenarios. Bears do not want to attack humans. They are usually just trying to get you to leave them alone or protect food or their young. The more we know about these beautiful animals, the more we can protect both them and us!