I frequently hear things like “I really hate snakes!” or “I’m not going hiking because there are snakes out!” Well, I’m here to tell you that it is entirely possible to continue hiking during the months when rattlesnakes are not hibernating. With a little know-how, you won’t have to give up your summer hikes (hot as they might be!) Much like humans, rattlesnakes are just trying to survive. In fact, rattlesnakes play a vital part in the desert ecosystem. Rattlesnakes don’t want to run into you any more than you want to meet up with them. 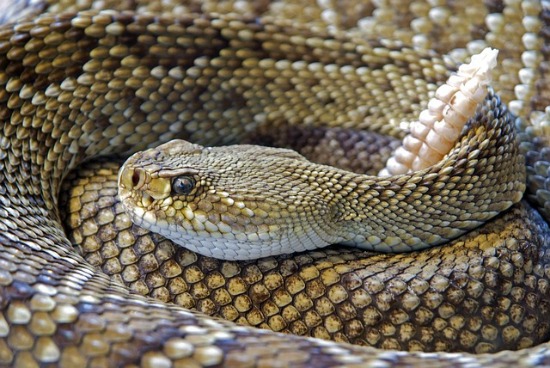 In fact, you’ll be happy to know that according to the U.S. Department of Fish and Wildlife, your chances of dying of a venomous snake bite is nearly zero (1 in 50 million will die) [source]. This is because of highly available quality medical care. So please do NOT let fear of rattlers stop you from enjoying your trails!

Unfortunately, rattlesnakes come in a variety of patterns and colors. So I can’t tell you that any brown snake with diamonds on its back is a rattler. But they do have a few defining characteristics.

Rattlesnakes are pit vipers. This means that they have visible pits on their head that can detect the heat of their prey. Their eyes have vertical pupils which allow them to see in very low light. One of the most distinctive features of a rattlesnake is the triangular shaped head. These snakes also have very thin necks, but fat bodies. They can range in size from 10 inches (newborns) to 8 feet long. 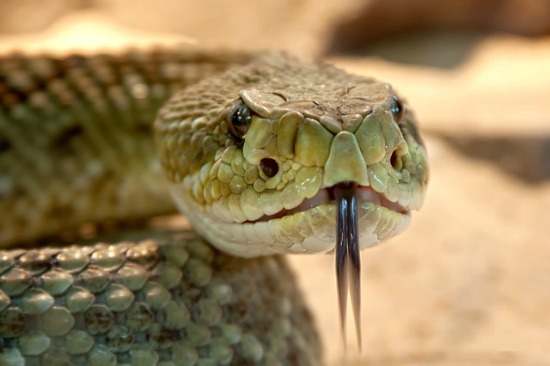 Rattlers are cold-blooded and need to seek out warmth when they get too cold. This is why you’ll often find them sunning themselves on a road or a large rock.

Each time a rattler sheds its skin it gets a new rattle segment. However, the rattles may break off or be damaged so some adults snakes will have no rattle. It is rare to find a rattlesnake with more than 8 – 10 rattles.

Rattlesnakes also have a hinged jaw which means their jaw can open 180 degrees wide. Since they do not chew their food, but swallow it whole – this type of jaw is necessary.

Rattlesnake fangs are like curved dual hypodermic needles (hollow). Venom can be injected into their prey via one or both (or neither!) fang. A “dry bite” is thought to be a very common occurrence when rattlers strike to defend themselves (rather than when hunting). However, if you are bitten – ALWAYS assume it was not a dry bite.

Rattlers live for approximately 20 years, although this number may be much less due to predators, disease, or other factors.

Rattlesnakes give birth to live young, but do not stay to parent them. The baby rattlesnakes usually stick around where they were born for 7-10 days and shed their first skin (including getting their first rattle) and then move along to find food. A mother snake will most often produce 8-10 babies.

Rattlesnakes are carnivores and their prey is dictated by how large they are. Most prefer mice, bunnies, lizards, and other small animals. Their food is slowly digested over a span of a few days. During this time, the snake will be very sluggish.

Rattlesnakes do not move in pairs. They usually are found in pairs during mating only (spring and summer). They are considered an adult at around 3 years, but females tend to have babies only once every 2-3 years.

How can I tell if a snake is a rattlesnake?

The most notable characteristic of a rattlesnake is the rattle on the end of its tail. The triangular shaped head is also very distinctive. If you aren’t sure if a snake is a rattlesnake or other venomous snake – do not approach it. Keep your distance and find an alternate path. Or wait at a safe distance until the snake has moved along.

When can I expect to see rattlesnakes?

Rattlesnakes hibernate each year in the Southwest. They usually come out of hibernation sometime in April or May and usually return to hibernation in September or October (although sometimes as late as December). They tend to be most active when temperatures are between 80-90 degrees Fahrenheit. This means that in the spring and fall they will be active through much of the day. However, when summer comes (with its much higher temperatures) rattlesnakes will be seen far less often.

In fact, rattlesnakes cannot tolerate temperatures above 95 degrees Fahrenheit for very long. Extreme temperatures can be fatal for them within 10 minutes so they are rarely found outside during the summer when temperatures consistently stay in the 100’s all day and all night.

These snakes tend to find a den to shelter in (and tend to return to the same den over time) in order to avoid the worst of the summer heat.

Here are some easy things to do while you’re hiking in rattlesnake country to avoid a bite.

What To Do if Bitten

The most important thing you can do if you are bitten is to SEEK MEDICAL ATTENTION.

A rattlesnake bite is ALWAYS a reason to call 911.

Let’s say you happen to be the person who was bitten and you’re all alone – call for help on your cell if you have reception. If not, walk slowly taking frequent breaks until you do have reception.

Now here’s where it gets tricky…what if you’re all alone on a four day hike out in the desert? You should still do exactly what I just said – walk slowly, take frequent breaks, and try to get to a spot where you can call for help. Believe it or not – this exact situation has happened before with a happy ending. 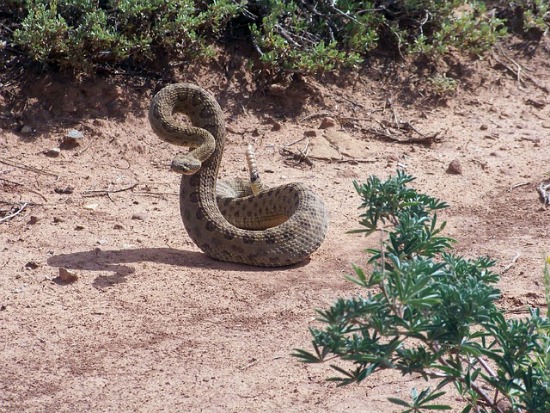 What Not To Do if Bitten

Now, hopefully I haven’t freaked you out too much. The point here is that a little common sense helps you to avoid bites, and even if a bite does occur – chances are very good that you’ll come out of it just fine. A little information goes a long way towards helping us avoid rattlesnakes and enjoy our beautiful deserts.