Cast iron dutch ovens have been a staple of outdoor cooking for hundreds of years, and for good reason. With this simple black pot, you can cook almost anything in the wild that you can in your oven at home (with a little practice at least).

You don’t need all of the expensive racks and hangers you see in all the pictures floating around the internet. Those are actually not all that helpful. Putting your dutch oven on the ground, outside of your campfire, is actually the best way to cook with it. 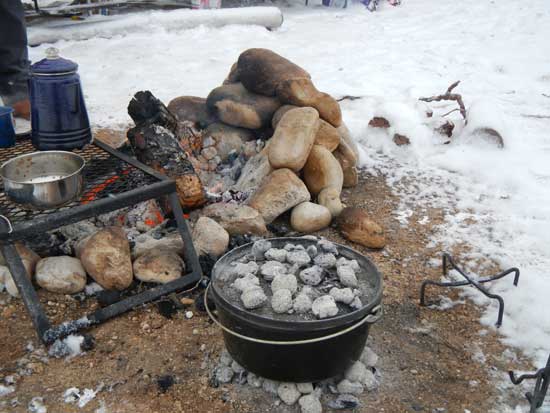 Below I go through a lot of the dutch oven accessories and equipment that I use to make cooking with my dutch oven easy. If you want to save some money, all you really need is the dutch oven itself (although I do highly recommend getting a lid lifter).

When selecting your cast iron dutch oven, there are three things you’re looking for. First, it should have short legs so that it can sit above your coals and help keep it level. Second, it should have a flanged lid so that coals that are put on top for baking don’t slide off. Third, it should have a simple metal bail, or wire handle (you’ll primarily be using this metal handle to move your dutch oven around, so it should be sturdy).

Lodge and Camp Chef are the two most popular brands of cast iron dutch ovens on the market and both make high quality equipment. I use Lodge, not for any other reason than that’s what I started with and it works perfectly. Either brand is a good choice.

My recommendation for a first dutch oven is the 12”, 8 qt., Lodge Deep Dutch Oven. It’s a bit more versatile than the regular, shallower dutch ovens, due to the extra depth. Just keep in mind, if its what you decide to go with, the extra distance between the lid and food will make it cook a little differently when baking.

I use my dutch oven more for stews, chili and other liquid based dishes rather than for baking, so it works great for me (although I do make the occasional bread loaf and it works like a charm).

Regardless of whether you go for the deep dutch oven or the regular depth, I do recommend going with the 12″ version for a first purchase. You’ll be able to handle a lot more variety in your dishes due to the size. Smaller dutch ovens will limit what you can cook.

As a lighter alternative to cast iron dutch ovens, you can also get an aluminum version. They are lighter, but my understanding is that they can get hot spots fairly bad and don’t hold heat like cast iron. I haven’t tested them out at this point though.

A good lid lifter is one of the most important dutch oven accessories outside of the dutch oven itself.  Lodge makes two kinds, the standard hook version and their ‘deluxe’ version. I prefer the deluxe lid lifter due to it having more stability when pulling the lid off of your dutch oven. By being able to grab the lid this way, you don’t have to worry so much about it swinging and dumping coals into your stew. 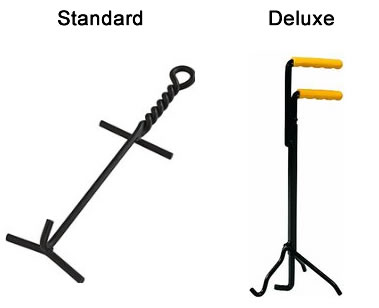 Again, these are both Lodge Brand. If you want to try something else, then go ahead. Lodge is what I use, so its the only thing I can vouch for.

A lid stand isn’t an absolute necessity, but its really handy when you don’t have a clean, flat surface to set your lid on. Its cheap enough that it was a worthwhile buy for me and it packs up small enough that it isn’t a problem hauling it around when I’m car camping. 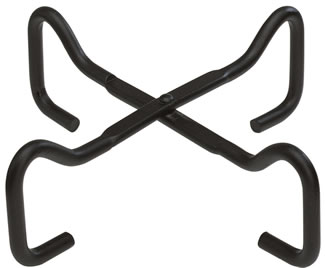 Whatever you do, you’ll need something clean to set your lid on when checking on your food. Moisture will gather on the underside of the lid while you’re cooking, so if you set it on anything dirty, you’ll end up transferring some of that dirt to your food.

One problem that I had with my dutch oven, especially in the winter, was the cold wet ground sapping the heat from my coals, and in some instances putting my coals out all together. Instead of buying a fancy cooking table, I just bought a $14 steel drum cover and drilled 1/4 inch holes 1 1/2 to 2 inches apart in the center (in a circle about the same circumference as my dutch oven). 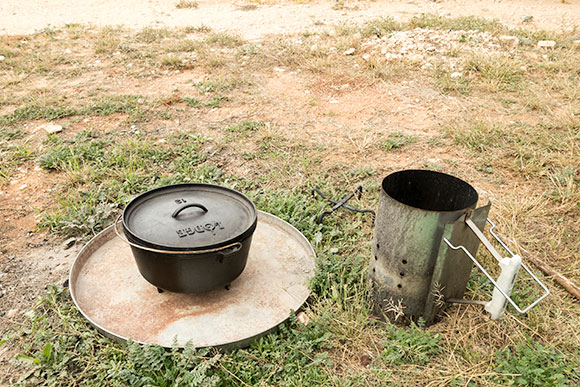 The holes allow a little airflow to my coals (it helps if you prop the drum cover up on some pebbles) and it really does a good job of helping me maintain a constant, hot temperature. 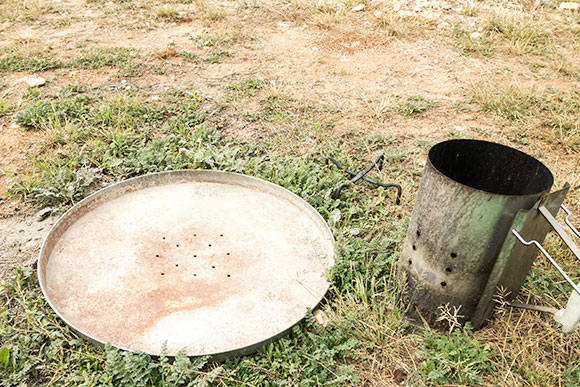 Setting up with the drum cover has made a big difference in my cooking. At this point, I consider it one of the most important dutch oven accessories that I have. It gives me the best conditions for controlling my temperature and cuts down on the amount of charcoal I need.

It also helps quite a bit with clean up and fire safety. 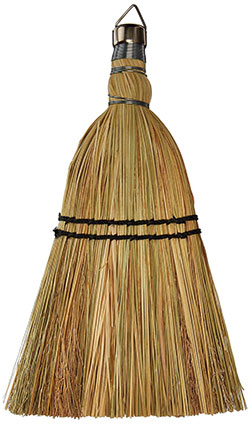 A wisk broom comes in handy when you’re slow cooking for long periods of time. Ashes will build up on the top of your dutch oven and underneath, which can smother your coals.

Use it to sweep spent coals off to the side so that you can put fresh coals down without them getting smothered by the leftover ash.

Just make sure you get a straw bristle broom and not one of those cheap plastic bristle ones. If you don’t, you’ll just end up with a melted mess.

I keep two different wisk brooms for cooking with my dutch oven (I’m a bit of a nerd). I keep a longer handled one that I use when I’m cooking out in the back yard and a small one that packs up easy for camping.

If you’re using charcoal briquettes instead of coals from a campfire, a chimney style charcoal starter is the best way to get your briquettes going before you put them under your oven (you’ll want them going well before you put your dutch oven over them or they’ll end up burning too slow and cool). 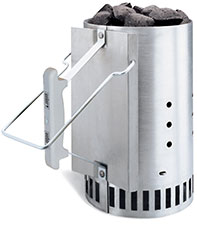 If you’ve used one before, you understand how helpful they can be.

It’ll also save you a little money in the long run by helping you to limit the amount of charcoal you’ll need to light at one time.  If you only need ten briquettes for a low and slow cook, that’s all you’ll have to light in your chimney.

It is kind of a pain in the butt to haul with you on a camping trip, so I only bring it if I have to use charcoal because I can’t build a campfire.

I keep an extra set of long handled bbq tongs with me whenever I’m cooking with my dutch oven.

My extra set isn’t for picking up food though. They’re for picking up hot coals. So, it doesn’t matter how dirty they get. Just don’t try to use them to pick up your wife’s steak (or don’t get caught doing that).

I use them to transfer briquettes from my charcoal chimney to my dutch oven so I don’t end up constantly dropping coals on the ground.

Get a pair, you won’t regret it.

I only use a shovel when I’m cooking with coals from a campfire.

Trying to use your bbq tongs to pull coals from a campfire can be hot and tedious. A small shovel will help you keep your knuckle hair intact.

Campfire coals can also be a bit brittle to grab with your tongs.

Instead of getting a regular short-handled shovel, consider using a metal fireplace shovel instead. A regular shovel can be a bit clumsy. 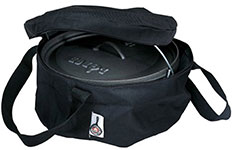 Although I don’t have one of these, I’ve considered buying a carrying bag for my dutch oven for a while.

If you’re out on a camping trip, you might not be able to get your dutch oven completely clean before you pack up to head home. This will help you keep soot and other crud off of everything on your trip back to civilization.

I’ve gone without one for this long, so its obviously not a critical item to have with you. If you do decide to get one, make sure you get the right size for your dutch oven. 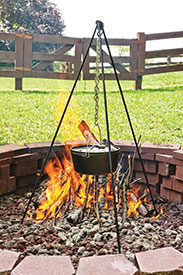 I’ve honestly never used a tripod and don’t plan on using one at this point in time. I only mention it in this post because a lot of people that are just starting out seem to think its a necessity.

They look cool but they aren’t very practical.

Due to the wind and a hundred other variables, its almost impossible to properly regulate the temperature around your dutch oven.

Also, with it hanging right over a roaring fire like you see in the picture to the right, how would you open the lid to stir, or even get it off the tripod when its done?

Maybe it could be helpful for keeping food warm over coals, but that’s about it. But you don’t really need a tripod for that either.

I would suggest that you skip the tripod and put your dutch oven on the ground or a metal cooking table.

I refuse to use dutch oven liners because I’m just too cheap. Why spend money on things that resolve themselves with a minute or two of work?

I also don’t like to generate a lot of trash when I’m out camping. Its just more crap that I have to pack out.

When you want to save yourself some time and aren’t as much of a cheapskate as me, they do appear to work fairly well. Parchment paper or heavy duty tin foil are a cheaper alternative than the actual liners.

Your call on whether you use them or not.

As far as the rest of the dutch oven equipment on the market. I really don’t see the point in spending money on it. I think it probably only exists to separate you from your money.

Just start with the basics and down the road, if the gizmos still make sense to you, then by all means, break out the credit card.