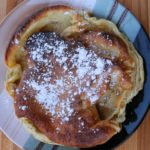 If a crepe and a pancake got together and had a child – you’d have a dutch baby. It’s sort of like an eggy, fluffy pancake. Not surprisingly, when we’re talking about a dutch oven dutch baby it tastes even better. I don’t know what it is, but dutch ovens make food taste better. Top […] 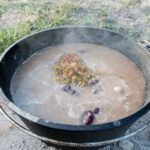 Pinto beans are best kept simple, so in this savory pinto beans recipe we’ll do just that. Some recipes, like what some people call “cowboy beans,” call for loads of sugar and other ingredients, when at its simplest, a good pinto beans recipe doesn’t need anything more than salt, pepper and some sort of fat […] 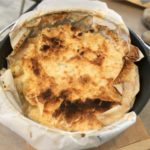 In my quest for the ultimate campfire dessert – I stumbled onto a number of recipes that called themselves a dutch oven apple cobbler. After reading the ingredient list I realized it’s more like a dump cake mixed with a cobbler. The good news is that it takes the best of both things – the […] 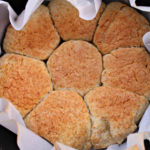 I really love biscuits, but I’ve always been a little too intimidated to try them from scratch while camping. I usually just grab some of those canned ones and haul those along in the cooler. But now that I’ve got a dutch oven – I decided it was finally time to give them a go. […]

While a dutch oven might not be ideal for a backpacking trip – if you’re going car camping – dutch ovens are one of the most versatile pieces of cookware you can bring along. I’m new to using dutch ovens outside my oven (cooking with charcoal or fire sounded more intimidating than my nice temperature […]

Most people think that chicken and dumplings are difficult or time consuming to make. They can be, but they’re not if you use cheap canned biscuits instead of making your dumplings from scratch, and believe it or not, they’re awesome. Believe me, you wont be able to make enough of this stuff. I made this […]

Now that it’s getting cold outside (we’re in West Texas, so it’s just now starting to get cold), I figured it’s time to break out the cast iron dutch oven chili recipe to warm things up.  It’s hard to beat a good bowl of chili when the temperature starts to drop. I also rarely pass up […] 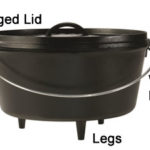 Cast iron dutch ovens have been a staple of outdoor cooking for hundreds of years, and for good reason. With this simple black pot, you can cook almost anything in the wild that you can in your oven at home (with a little practice at least). You don’t need all of the expensive racks and […] 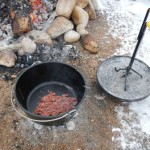 Mountain Man Breakfast is an old classic that’s been done on multiple other websites, but I feel the need to re-hash it here because its super easy to make and its one of my favorite breakfasts to cook at the campfire when I have my cast iron dutch oven with me.