My family recently went on a week-long camping trip in the Greer, Arizona area and absolutely fell in love. The Greer area was one of the hardest hit places when the Wallow Fire burned in 2011. The area is recovering nicely though and there is a ton of regrowth. While we were camping – we went on several hikes, but one of our most exciting hikes happened in the Pole Knoll Recreation Area which is located just outside of Greer in the Apache-Sitgreaves National Forests (34.05472778, -109.5024472). 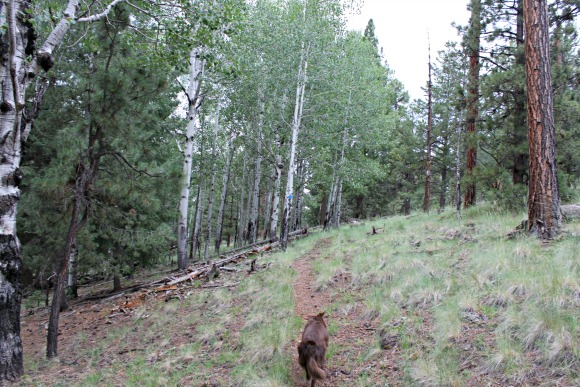 Our primary motivation to leave the Phoenix area was to escape the heat (July temperatures are consistently 105+ degrees Fahrenheit.) Greer sees daytime temperatures in the mid to high 70’s and lows at night in the high 40’s to low 50’s. It was glorious! If you plan to visit – also be aware that nearly every afternoon from July through August there is a rainstorm. It’s usually quick (15-45 minutes long) and not too awful, but it’s definitely best to plan ahead or you’ll be pretty darn wet.

But despite being aware of this fact and actually experiencing it for several days we didn’t time our hike in Pole Knoll very well. We started out with a cool day and ended the hike after a very dramatic thunderstorm. On our way back down we actually came upon a tree that had been hit with lightning!! It was quite an experience!

Pole Knoll Recreation Area is actually primarily used for a cross country ski area in the winter. It turns out that it doesn’t appear to be all that well-used in the summer months. There are two parking areas – we chose to park at the one located off of AZ 260. There is a small parking lot (seen below) with a picnic area, an information board, and a vault toilet. There is no running water so you need to bring your own. And as you can see from the shot below – there was no one there but us!  I couldn’t get over how uncrowded everything was. 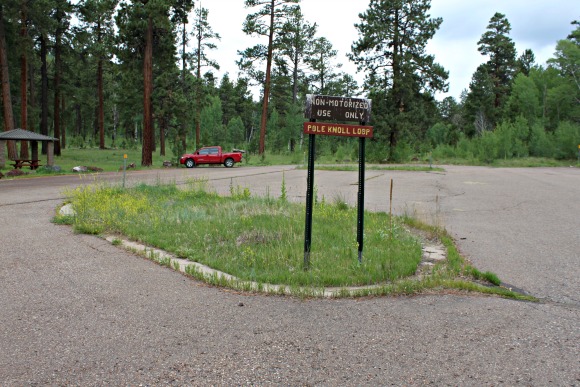 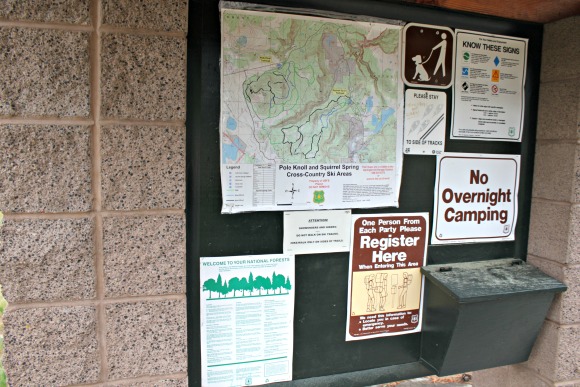 As you can see in the picture below – the map is marked for cross-country skiing. Green is easy, blue is more difficult, and black is most difficult. All the trails in this area are marked up on trees with color-coded symbols instead of signs closer to the ground. You can tell that the snow probably gets pretty deep up there. 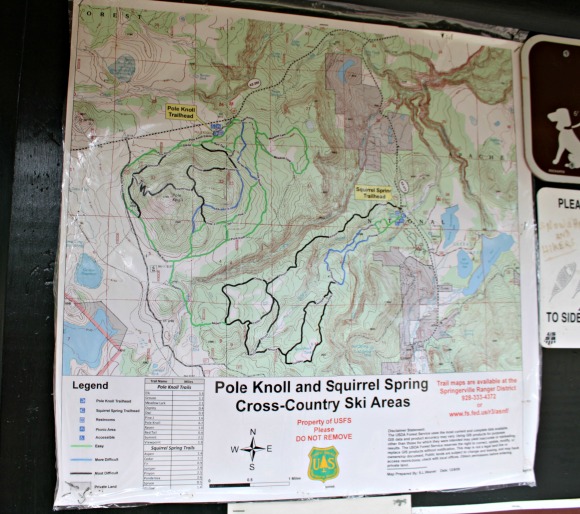 We opted to do a loop that took us on several of the trails for a short while, but the goal was to get to the viewpoint without a huge climb. Unfortunately, due to the thunderstorm, we never made it to the viewpoint, but the trails were all beautiful! We hiked for about 2 hours which included about 30 minutes waiting out the worst of the rain.

Here’s a shot of the vault toilets and picnic ramada areas. 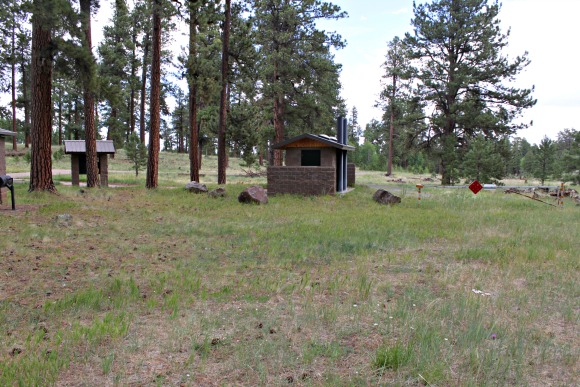 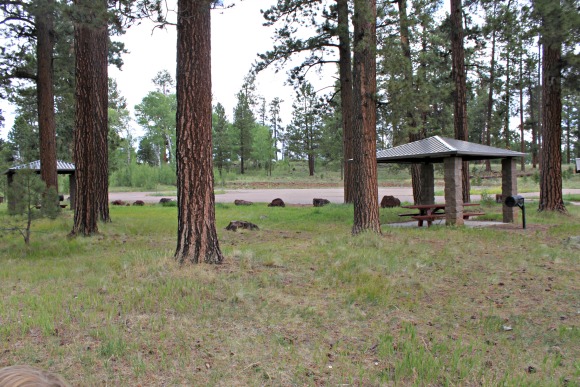 We started out on Pole Knoll Loop. The trails are well marked with blue diamonds. They’re most often fastened to trees at least 5 feet above the ground. The scenery was just beautiful with lots of evergreen trees and aspens. 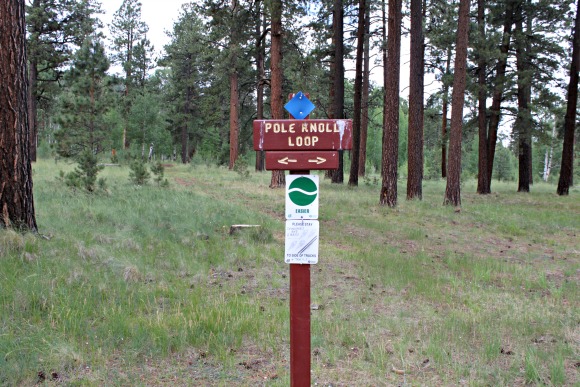 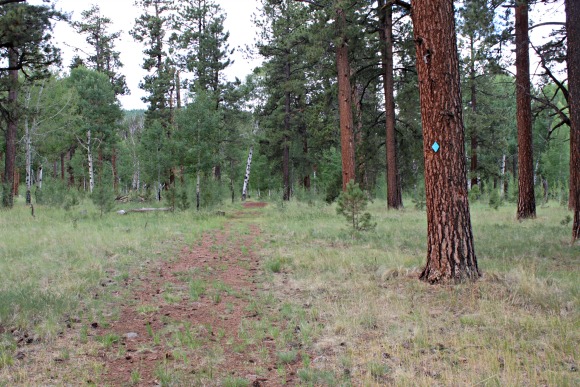 After a very short time on Pole Knoll Loop, we switched over to Red Tail. 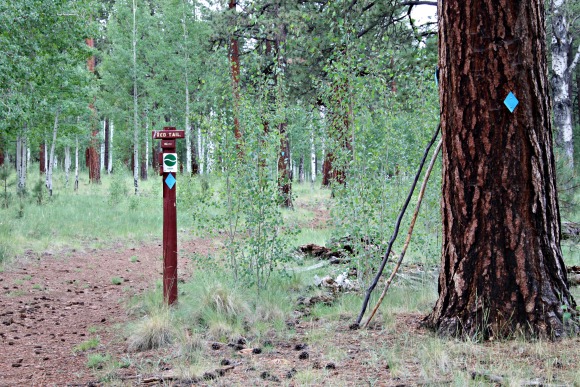 I loved the mixture of pines and aspens. It felt like we weren’t in Arizona anymore. 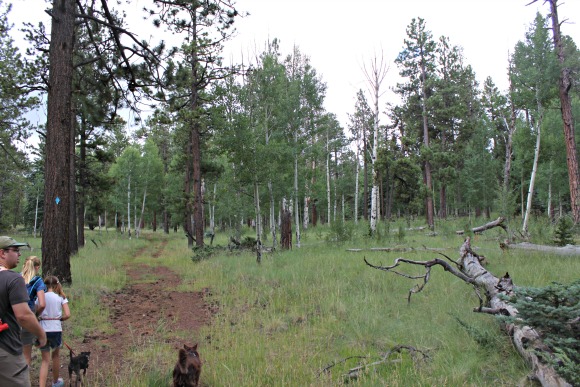 After another very short distance, we switched over to Osprey Trail. 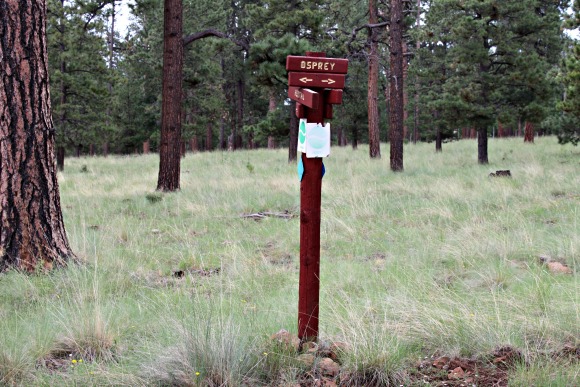 The trails are mostly old logging roads and you can really tell. They are very wide and flat in a lot of places. In the shot below – you can see how wide the trail is and you can see the small blue trail marker on an aspen tree just up the trail on the left. 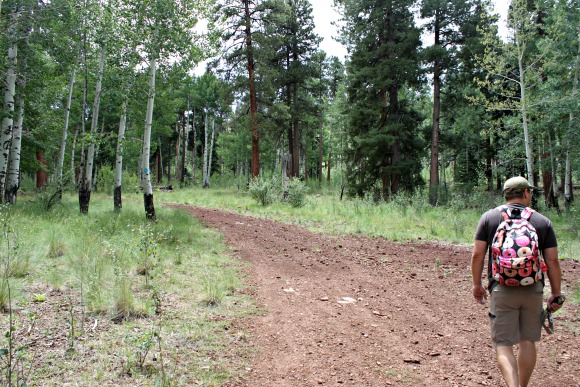 At this point in the hike, we were actually hot! The weather was muggy and warm and the sun was still out. Next up, we switched over to Summit Trail. 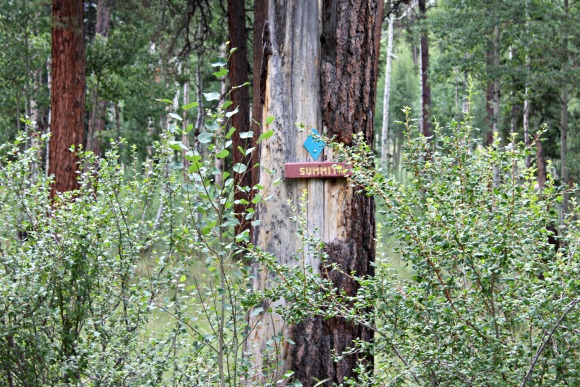 Maia was totally thrilled at how uncrowded this hike was. She was in her element. 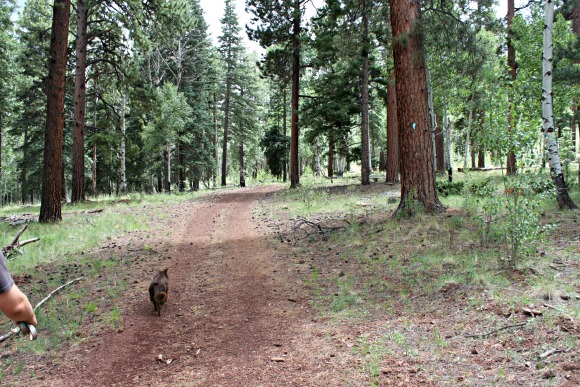 Then, we switched to another trail (crazy right?) – this time to Elk Trail. I kept seeing the signs of “Easy”, “More Difficult”, etc and laughing at how wrong they were. That is until my husband pointed out that they were probably meant for the cross-country skiers rather than the hikers. 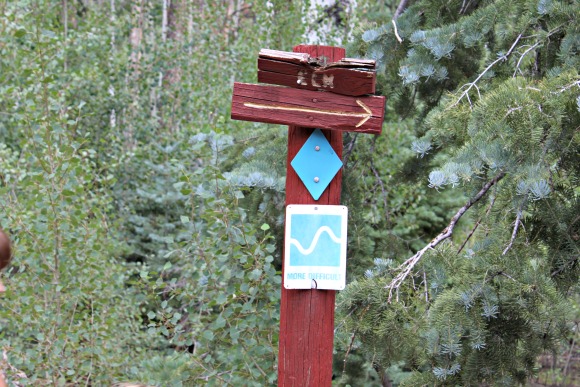 You can see in this next shot that we actually started to experience some elevation. 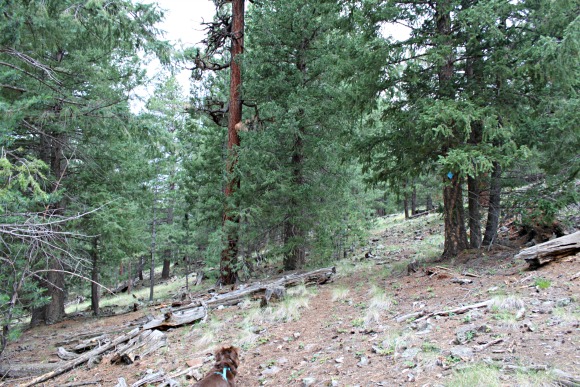 Elk Trail turns a corner and begins a pretty steep uphill climb. It wasn’t bad for hiking, but I couldn’t imagine doing it on cross-country skis. 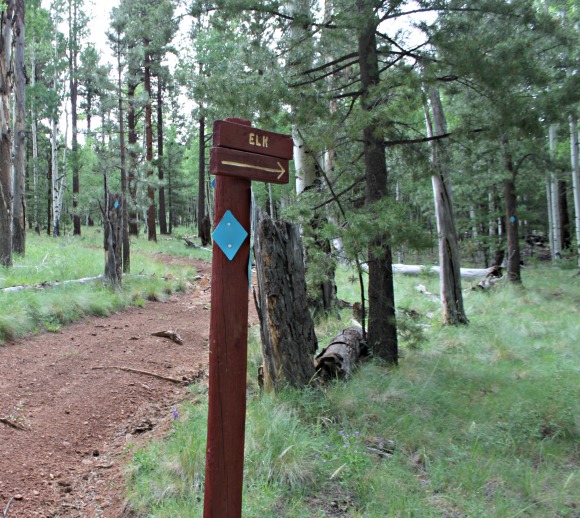 I should mention that it was at this point in the hike that the weather started to turn on us. We started hearing an awful lot of thunder and were hoping we’d avoid it if we hurried. So we were rushing the kids along (much to their dismay.) Sadly, we didn’t make it.

Here’s a shot of the Summit Trail turnoff that also leads to the Viewpoint area we had originally meant to go to. We skipped it to hustle on out of there as fast as we could. 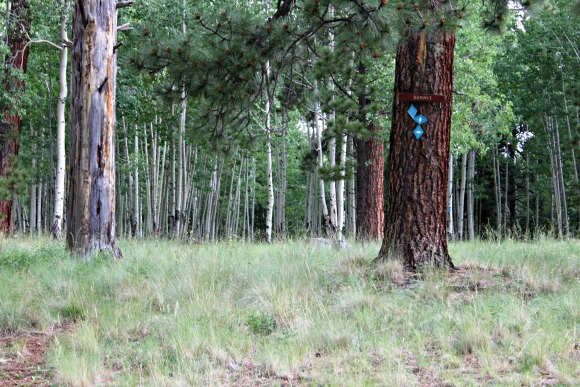 And this is the point when the sky simply opened up. We huddled underneath a tree to avoid being soaked through as much as possible. I realize that huddling underneath a tree wasn’t the smartest thing to do in a lightning storm, but it was dense enough forest that we didn’t have much choice. After seeing what we saw a short time later, we’ll take the soaking wet the next time we encounter a storm like this.

Here’s a shot of the rain (although you can’t see it very well), but it was really beautiful. 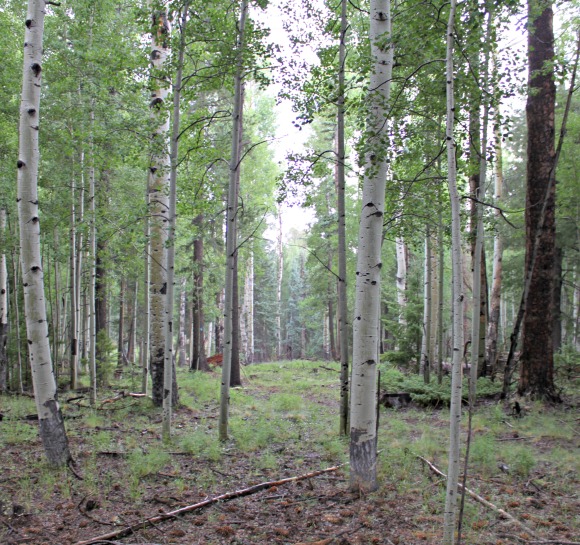 We ended up waiting about 30 minutes for the rain to slow. We had a snack and watched the rain thunder down.

As soon as the rain slowed, we opted to head back to the truck. 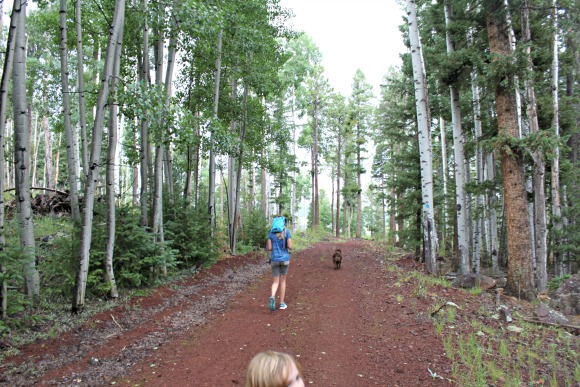 Some of the aspen trees had these wild bumpy growths down their trunk. 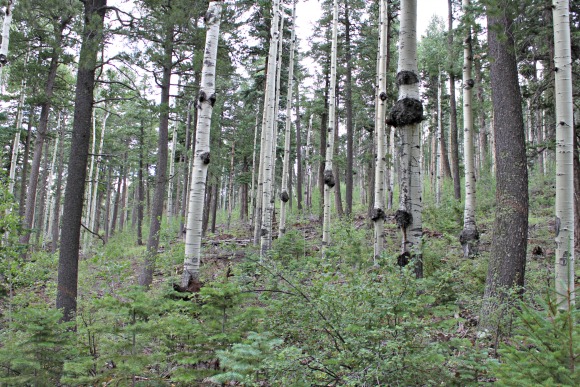 As we continued down the trail, on the left we noticed what looked like a fire burning. Well – it turns out lightning had struck a tree down the hill. We didn’t realize that it was actually right on the Summit Trail until we got a little further down. 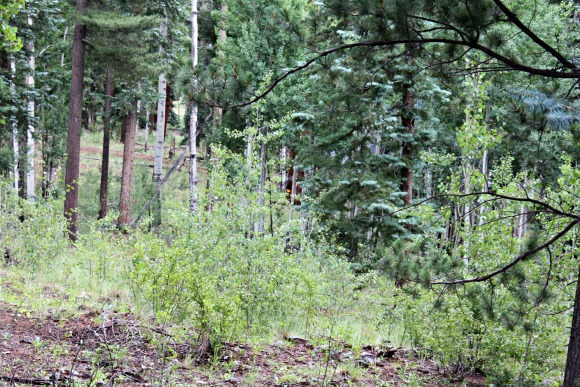 Here’s a shot of the lightning strike as we approached it. 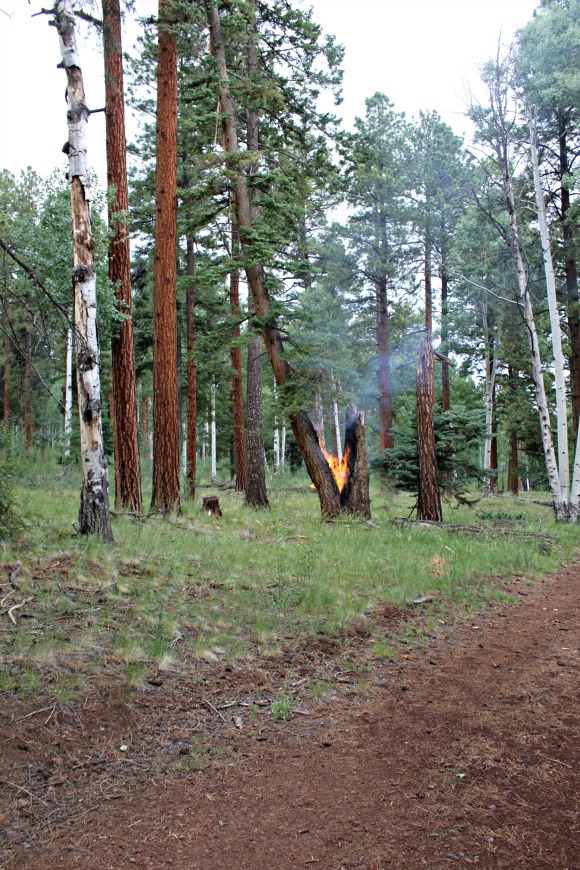 And here’s a close up of the fire. 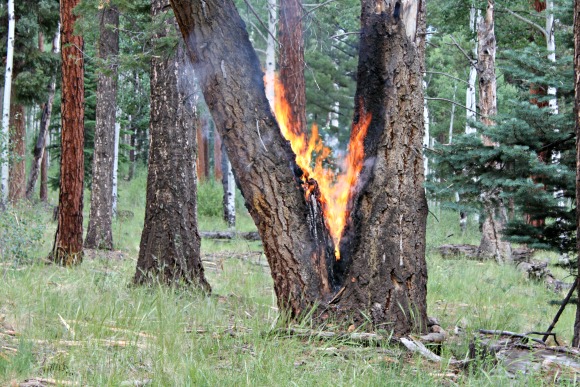 And from the other side… 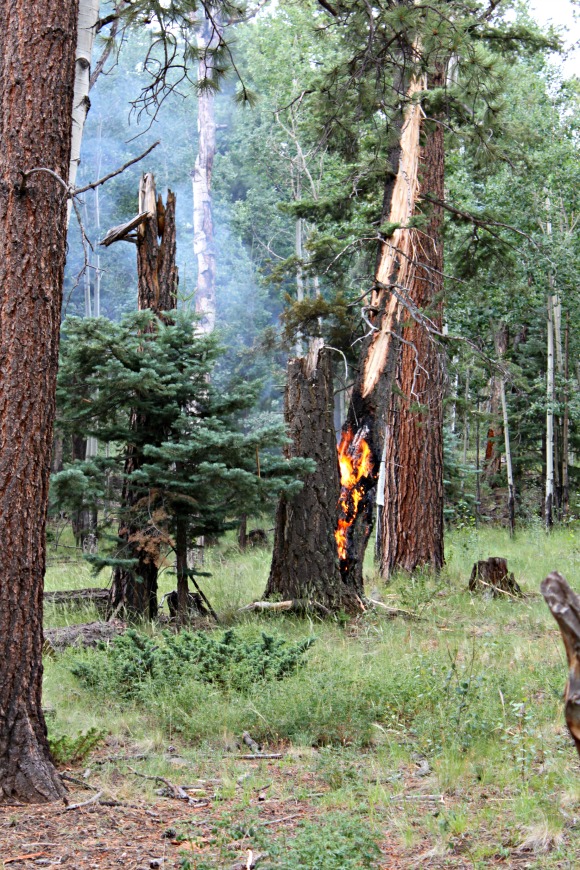 It was pretty incredible to see up close. We reversed our trail route from there (Red Trail to Pole Knoll Loop Trail) and tried to move as quickly as possible. We wanted to get back to the trailhead so we could call the local park ranger and report the fire.

When we got to the trailhead we called and reported it and they said they were sending a truck out to investigate and hopefully put it out. After the Wallow Fire, I imagine potential forest fires are taken very seriously.