If you’re looking for a spot that is a great place for a picnic, a hike, checking out some beautiful scenery, or all three – you’ve got to check out Tonto Natural Bridge State Park in Payson, Arizona. My hubby spotted this park on a map and got all excited that there was a natural bridge so close to home so when it came time to drop off my oldest at Girl Scout camp this summer, we opted to go up a bit earlier in the day and check it out first. We were not disappointed.

The Tonto Natural Bridge is a natural travertine bridge (believed to be the largest in the world) that is found in a very small valley just outside of Payson. When you turn off the highway to go to the park, all you see are pine trees. At first, we thought we took the wrong turn-off. Then you suddenly start a fairly steep descent into the valley and you realize what you’re about to experience. 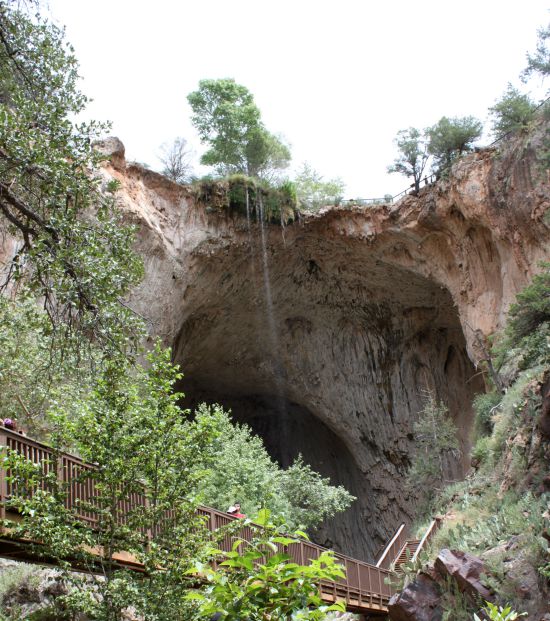 The park itself is rich with history. It was originally discovered by prospector David Gowan in 1877 who inadvertently found the bridge while trying to escape pursuit by Apaches. He hid for two nights in a cave inside the bridge. He then claimed squatter’s rights and in 1898 convinced his nephew, David Gowan Goodfellow, to bring his family from Scotland and settle the land with him. When the Goodfellow family eventually arrived, they had to lower their possessions down the 500 foot slopes via ropes and burros. It’s a lot easier to get there now!

The drive down winds around the valley and takes you first to the historic lodge and gift shop and a contact station where you will pay your entrance fee. The entrance fee is per person and as follows:

Pets are only allowed at the parking lot level and viewpoints and must be kept on a 6-foot leash at all times. They cannot be left alone in a vehicle while you hike the trails (and it’s usually too hot for you to safely do this anyway.) My advice? They’re better off left at home for this trip.

There are flush toilets in a building next to the lodge, but there are vault toilets and drinking fountains available elsewhere in the park. The parking lot level has a huge grassy area with lots of shady picnic areas including charcoal grills. We packed a cold picnic and enjoyed our lunch before we got started exploring the bridge and trails. The next time we visit we plan on having a big snack before hiking and then grilling an early dinner there before the drive home.

The park contains multiple hiking trails and four separate viewpoints. If you’re bringing young children or folks who wouldn’t be able to climb on rocks, stay at the viewpoints. But if you’re up for an adventure and don’t mind a rough trail – bring good hiking shoes (ones that can get wet are best), plenty of water, and your camera. It’s beautiful!

After we had our lunch, we grabbed our hiking gear and went to explore. We wanted to start by checking out one of the viewpoints to get a good look at the bridge from above. The trail starts out as a normal forest hike. 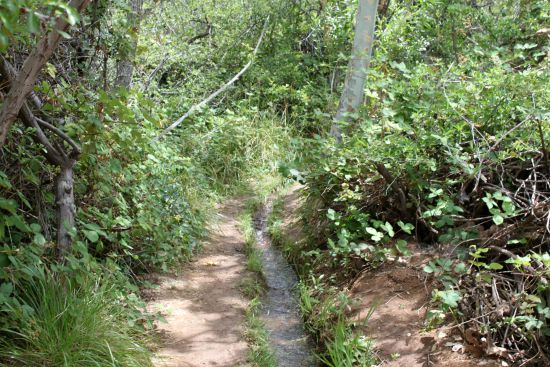 Nearly immediately, you get to Viewpoints #3 and #4. Viewpoint #3 actually has a hole with a grate covering it that allows you to see down into the cavern below the bridge. The nice volunteer who happened to be standing there showed me that if you use your cell phone directly on top of the grate, you can get an awesome shot through it (183 foot drop.) You can see the shadow lines of the grate in the top of the picture. 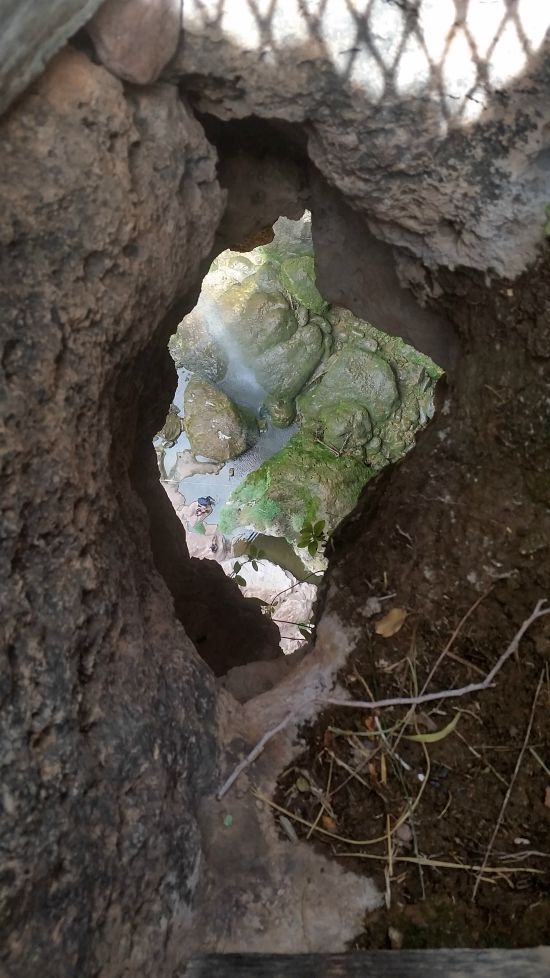 If you stand up and look over the rail, you can see how thick the bridge really is. 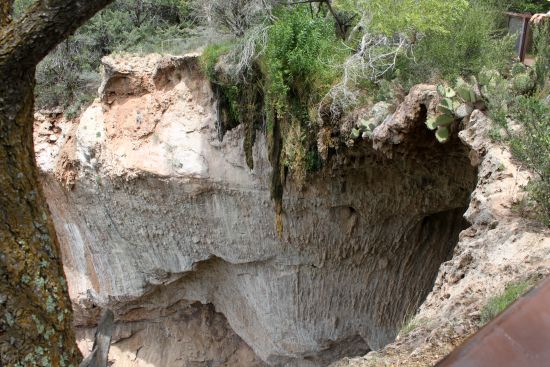 Continuing along to Viewpoint #4, if you look left you get a view of the walkway you take to access the caverns underneath the bridge. 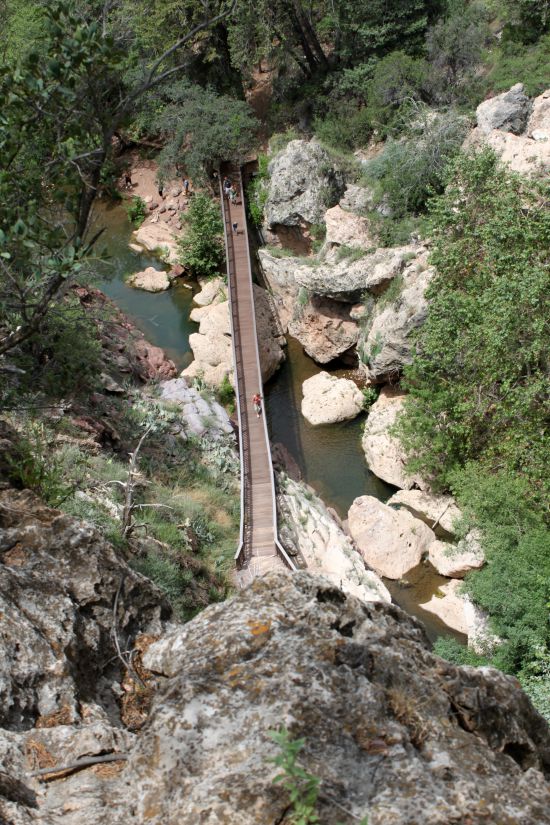 And if you look right – you see the bridge in all its glory. 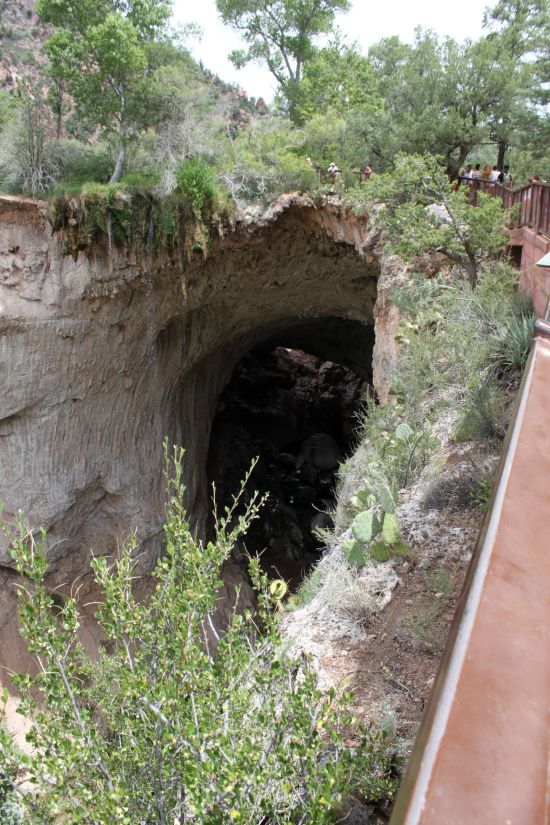 After checking out the viewpoints, we headed on down to the trail that leads you to the caverns underneath the bridge (the Gowan Trail.) The temperatures while we were there in mid-July were in the 90’s. The temperature is substantially cooler while you are in the caverns beneath the bridge because of the constant water dripping from the rock. But you’ll need to pack plenty of water for the hike up and down. The ranger station recommended no less than 2 liters per person (one liter for the hike down, one liter for the hike up.)

I should also mention that the hike is rough, steep, and rocky in parts. My kids handled it well (11, 8, and 5), but they are good hikers. Be prepared to carry very young ones for at least part of the time. The first part of the trail is easy to follow because of the clearly marked path, but eventually you’ll need to look for spray-painted white dots to mark the path (this is mostly inside the cavern and beyond.)

My youngest was really excited to go swimming there for some reason. You aren’t allowed to swim in the pools directly underneath the bridge, but there are several other designated swimming/playing areas where you can get wet if you want to.

The first placed we stopped was a pretty little spot on the Pine Creek (which runs directly beside the trail.) We checked out some bugs and enjoyed how much cooler it was already. 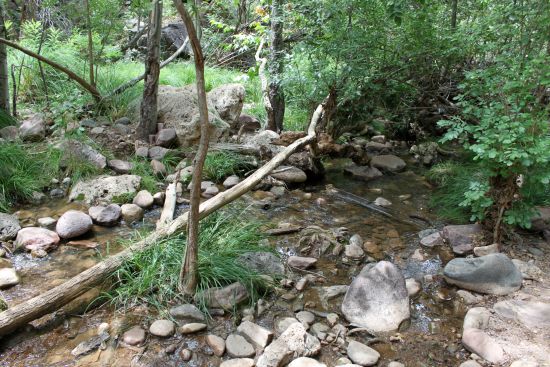 Everyone was pretty excited to keep going so we walked across the bridge and went to the observation deck that is at the same level as the caverns. The bridge suddenly looks huge. The trail that leads down there nowadays is steep, but well maintained. However, you can actually see the original trail that people used to use (which has been carefully blocked.) It cuts nearly straight down the side of the valley with steep switchbacks. I chatted briefly with a woman on the trail who used to come to the park decades ago and she recalled being terrified of the old trail because it was so steep. 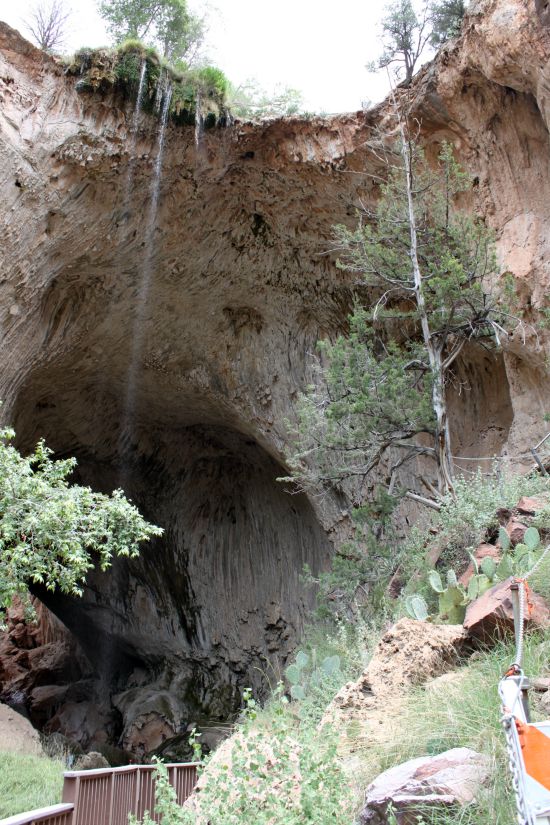 As you continue on the trail, you come right up to the entrance to the caverns. It gets darker, colder, and much wetter. It is also one of those sights that makes you go “oohh!” The sheer hugeness of the bridge is breath-taking. 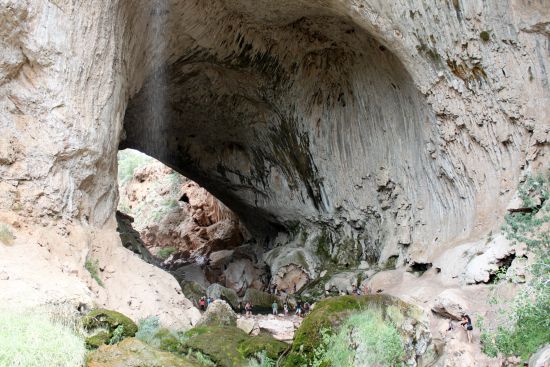 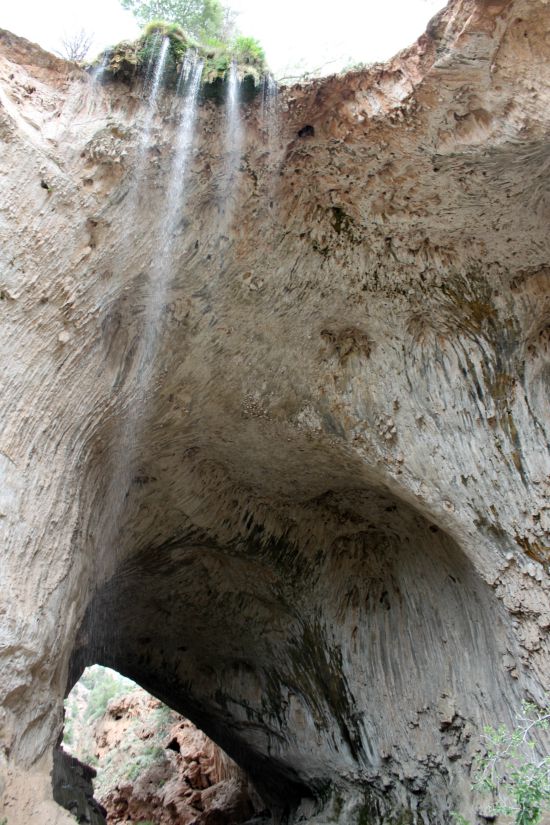 Once inside the caverns everything is super slippery so be careful. We saw more than one person slip and fall. You should also expect to get a bit wet since there is a constant heavy drizzle coming from the waterfall above and inside the cavern from the rocks above. It is incredibly refreshing when it’s a hot day, but I imagine it’d be a bit chilly if it were winter. Also I highly recommend hiking shoes that are water friendly. There were a lot of folks with flimsy tennis shoes and drenched feet.

If you’re not up for crowds, you should probably stick to a winter visit. It’s a popular park when the weather is nice. The picture below only captured a fraction of the people that were in the caverns with us. 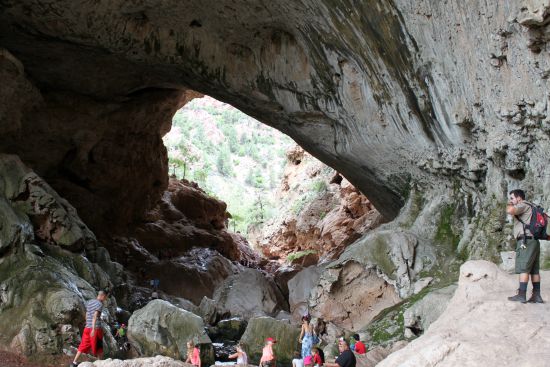 We followed the trail through the cavern and out the other side and kept going. I will mention that there was one specific gnarly spot that was quite difficult to cross. It involves hugging a boulder for dear life (with a steep drop below you) while carefully finding your footing across. We were quite lucky to have the help of some kind strangers who helped us spot our kids while they scooted across. The rest of the hike inside the cavern wasn’t too bad, just a bit wet and rocky.

After we got through the hard part, we wanted to keep hiking. The trails from there are rocky (not dirt trails, but boulder climbing), but not as tough as the trail underneath the bridge. This is a shot looking back after we climbed all the way through the cavern. 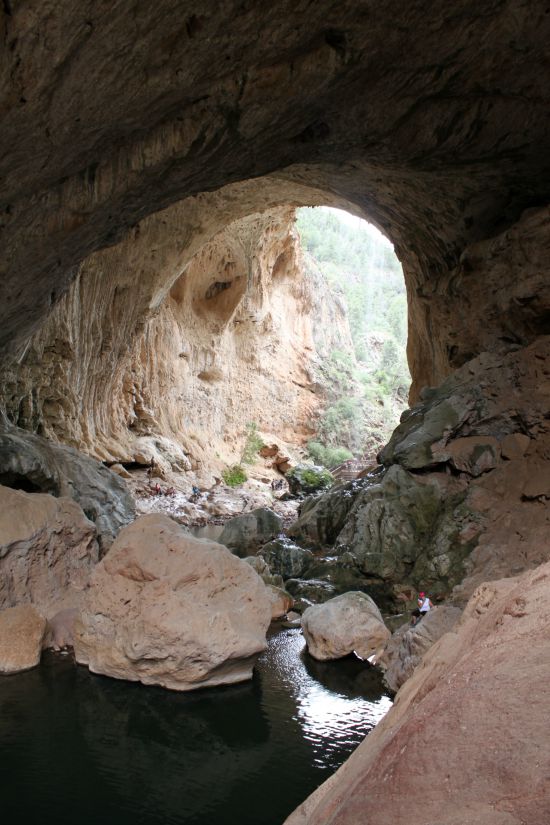 If you turn the other direction, this is your view. The walls of the bridge are quite interesting. 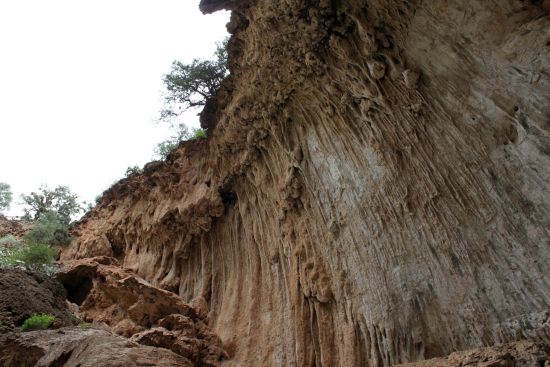 From there, you can continue hiking around the Pine Creek Trail. The scenery is beautiful. 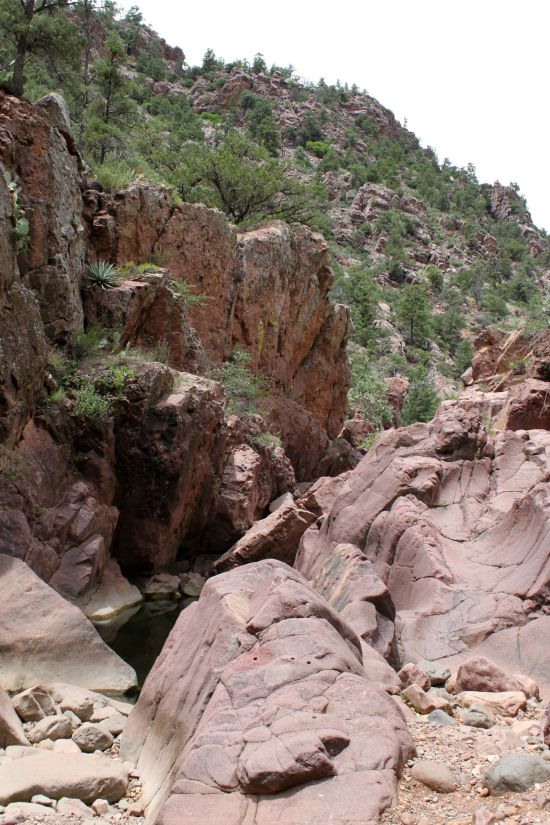 All told we ended up taking a few hours to do the trails, but we were in no hurry and stopped often to drink water, look around, and enjoy. We eventually came off of the trail close to Viewpoint #1. The view from that side is pretty amazing as well. 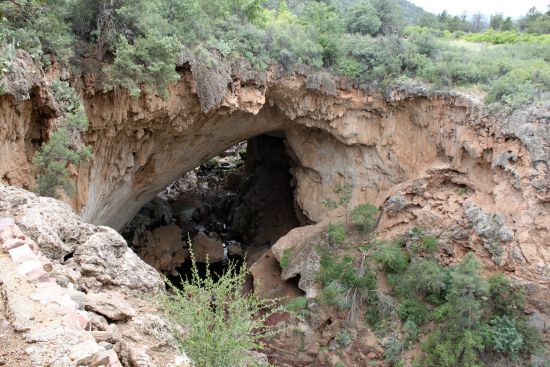 I took a shot looking up from this and you can get a feel for how the valley as a whole looks. 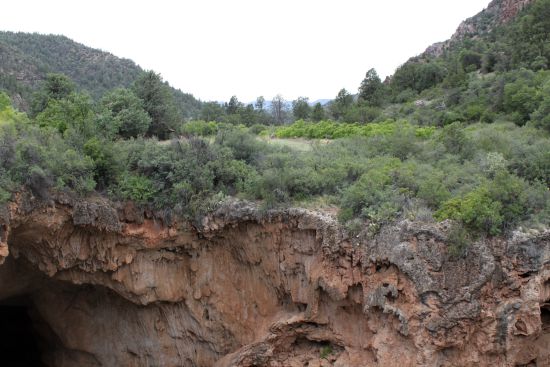 A few last things that are worth mentioning – no glass is allowed in the park, there is zero cell reception in the valley and no public telephone available. Hours are seasonal so when you plan your visit, it’s a good idea to check out the website first at Arizona State Parks – Tonto Natural Bridge State Park.

Our family had an absolute blast checking this park out. I highly recommend it and we can’t wait to go back!