While on our camping trip to Greer in August, we set out to do the Indian Spring Trail (a 7.5 mile loop), but the weather wasn’t our friend and the heat drove us to change our plans. We ended up veering off onto Big Lake Lookout Trail. It was a happy accident because both trails have beautiful scenery and Big Lake Lookout Trail ended up being very interesting. The Lookout Trail is a much shorter out-and-back trail with a total distance of 2 miles. 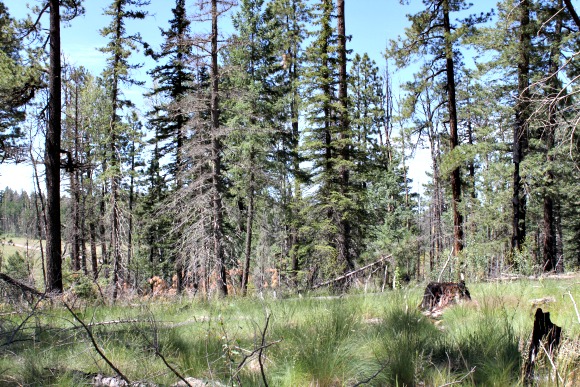 The turnoff for the Big Lake Lookout Trail is about a half mile from the beginning of the Indian Spring Trail (33.869455, -109.398840) (the south side where the parking lot is located.) There is a small parking lot at the trailhead, but no water or restrooms. While Greer is generally a much more temperate part of the state than where I live – it is still important to bring enough water because the highs that day in August were in the mid 80’s. Dogs (on leash) are allowed as well as mountain bikes, but no horses or motorized vehicles. 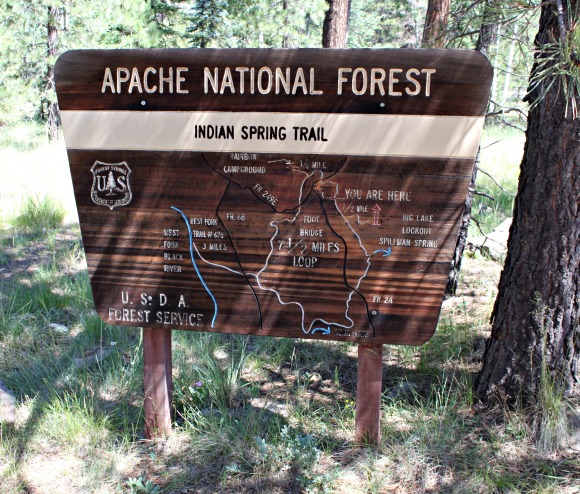 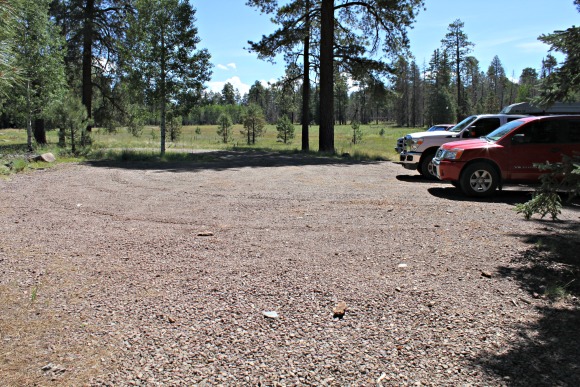 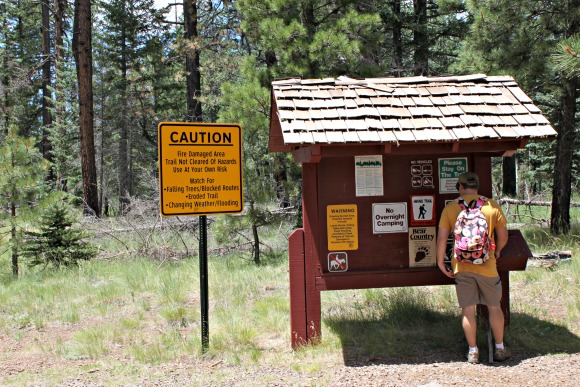 The Big Lake Lookout Trail is named that way because it used to lead to a lookout tower. The Big Lake Lookout Tower was built in 1933 and remodeled in 1967. It was 30 feet tall with a 12 foot square observation deck. The tower was staffed during May through July and the lookout was responsible for detecting forest fires. Unfortunately, in the Wallow Fire of 2011 it was completely burned. The top of the trail now dead ends on a great view, but no tower. The remnants of the steps and concrete footings are still there as well as the access road.

The trail starts out nice and flat with lots of grasses and fairly sparse trees. And while there was another car parked in the parking lot, we only saw a handful of people while on the hike. 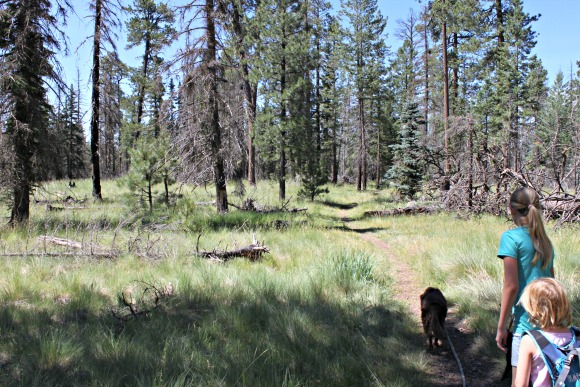 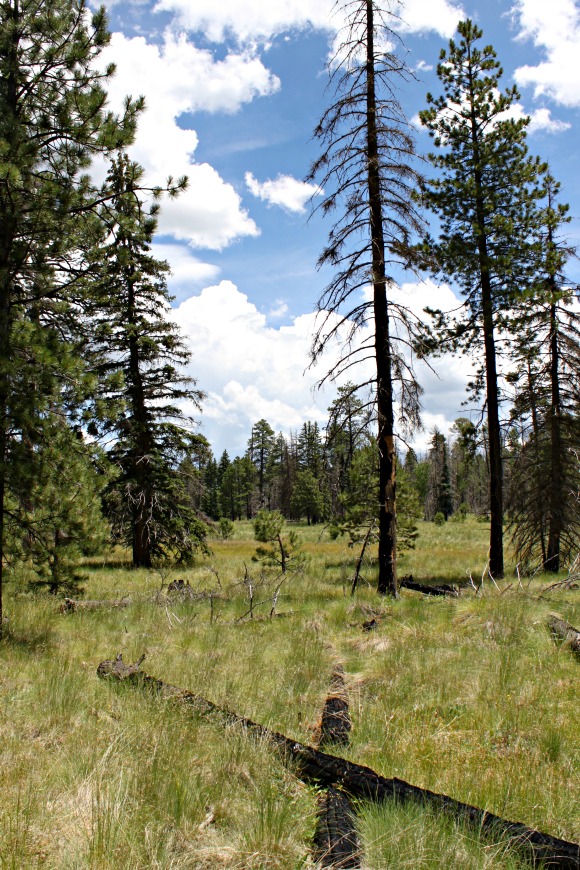 We saw quite a few mushrooms along the trails. After the spring rains, there are a lot of mushrooms in this area. Apparently they last into summer. From talking to our friends who are mushroom hunters, I know that mushrooms love a place after a rain and a burn. And after seeing how much it rains in Greer combined with the big area affected by fire – I can only imagine that it’s mushroom paradise. 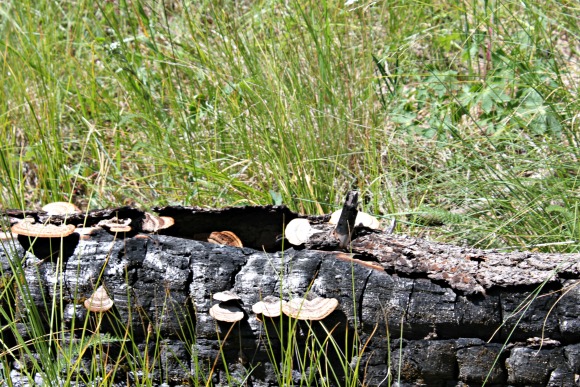 The trail continues on for some distance without much change in elevation. It’d be a great trail for mountain biking or beginning hikers. 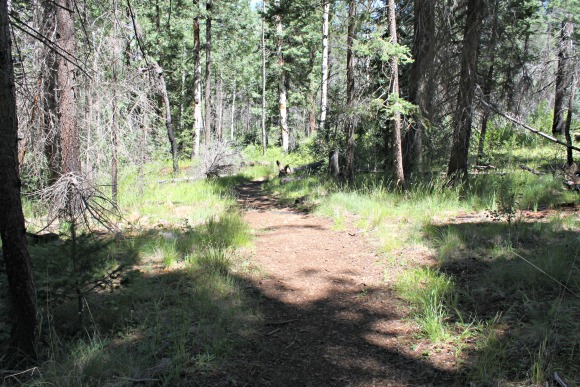 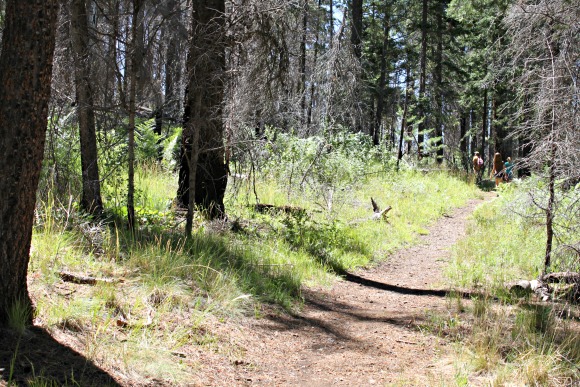 Here’s the ‘Y’ that is the turnoff point for the Big Lake Lookout Trail. 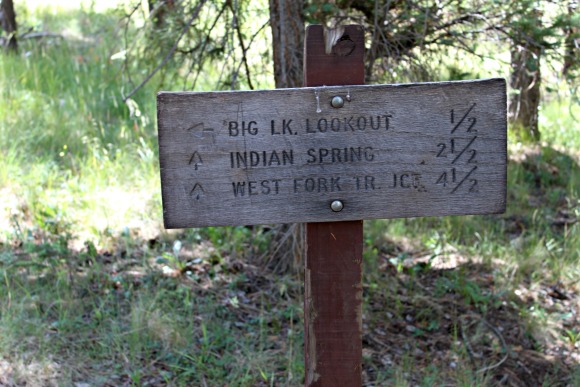 I love this picture because it really shows you the old and new growth. The baby aspen trees stand in front of the old burned ones. 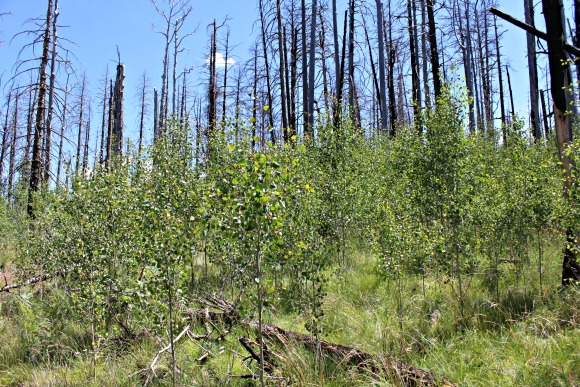 From what I’d read about this trail, there was a good chance that we’d see elk or deer near the trail’s borders. While we didn’t see any live elk or deer, we did see some bones and a freshly removed deer leg laying on the trail on our way back to the trailhead (it wasn’t there on the way in!) I only took a picture of the bones because the leg was a little too gory. Strangely enough, even though the skeleton was completely cleaned – it still smelled horrible. We smelled it before we saw it. 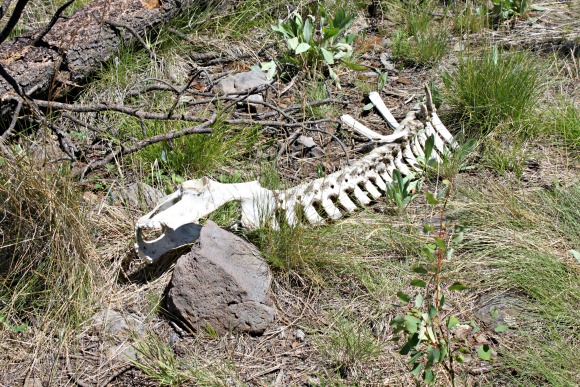 Right from the moment of the turnoff to Big Lake Lookout – the trail got considerably steeper. 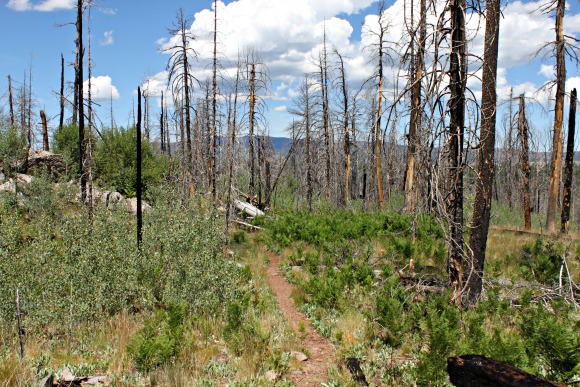 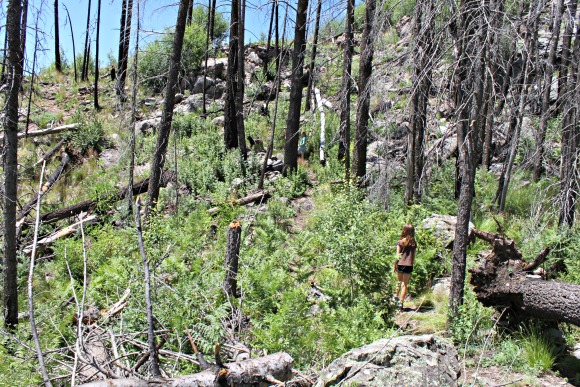 This is where you get to the forest service turn-around road. From this point, you turn to the right and you see wooden steps leading upwards. 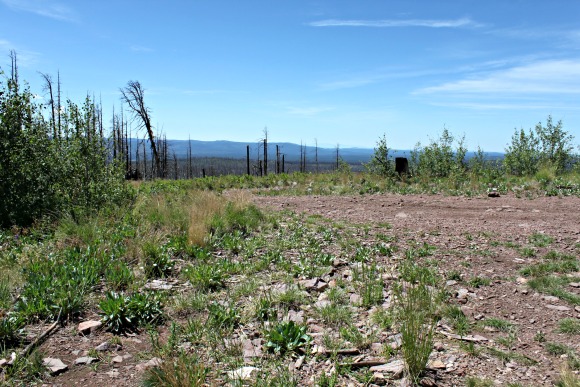 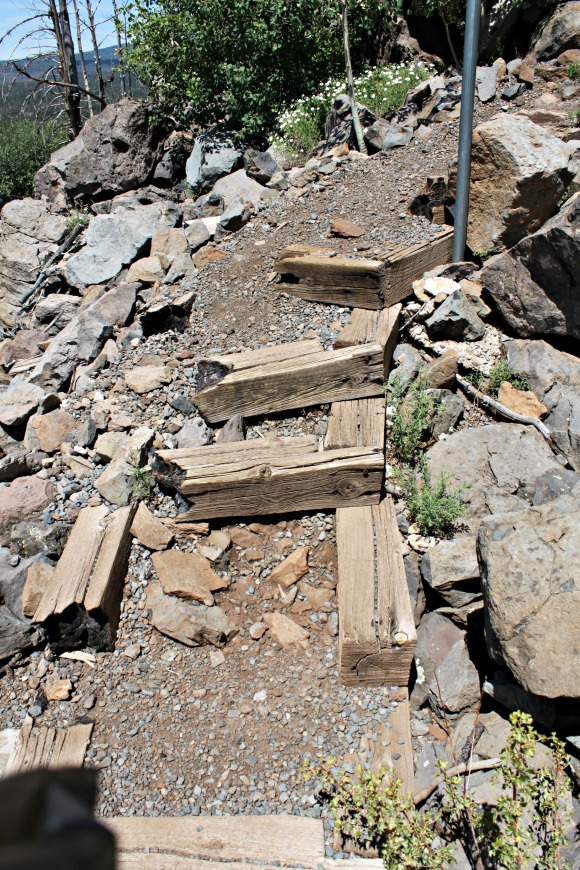 Here’s the view right before you climb the steps. 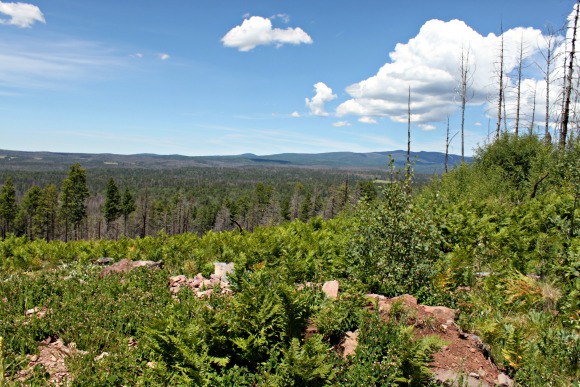 And here’s a shot from the bottom of the steps. 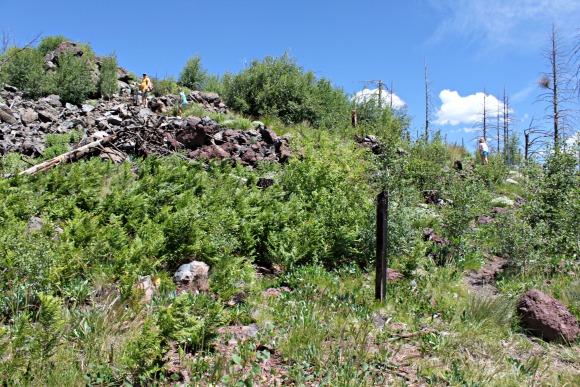 And the top of the steps looking down. 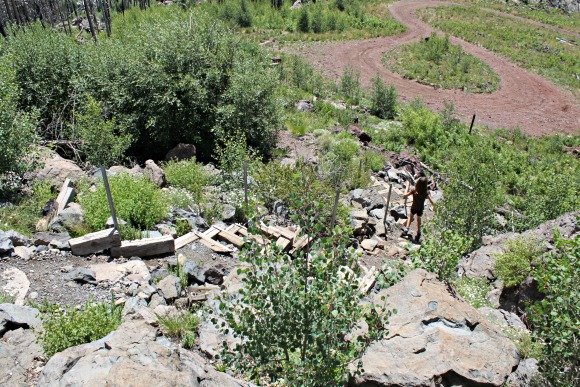 Once you climb the steps you can stay put on the old footing area where the tower used to be – or you can inch out onto a rock ledge and get a very spectacular view of Big Lake and pretty much the whole surrounding countryside. 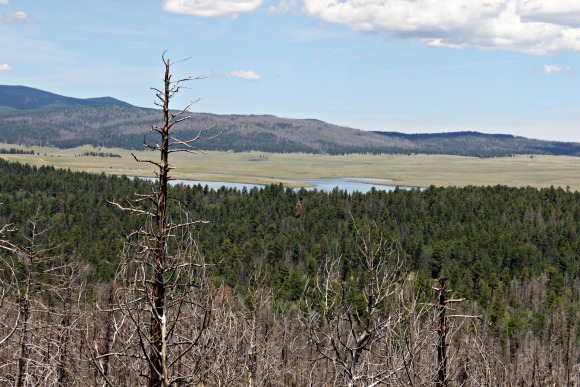 Perhaps one of the coolest parts of this trail is seeing the remains of where the tower stood – and that included metal that had been melted onto the rocks due to the heat of the fire. The picture below is some of what you can see underneath where the building used to stand. The building itself is completely gone. 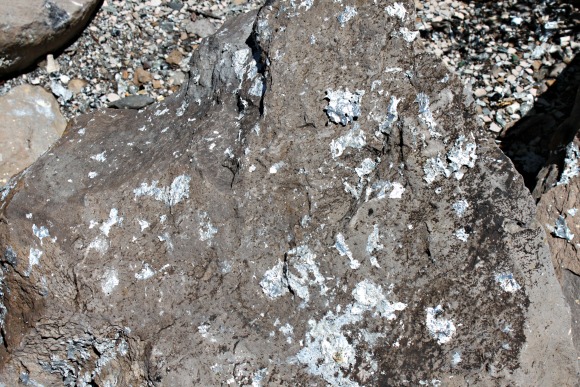 Once you spend time admiring the gorgeous view – you simply head back the way you came. On our way back we stumbled across this wild raspberry bush which I thought was very pretty. 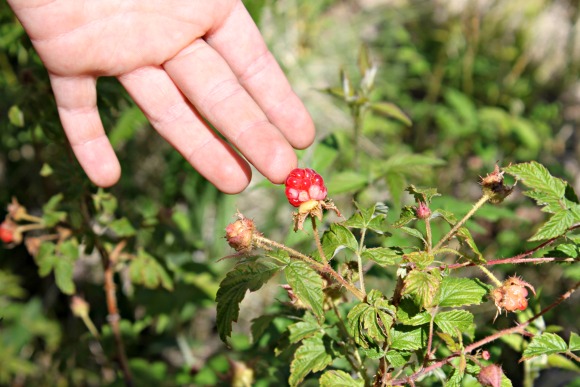 While I really want to do the complete Indian Spring Trail the next time we’re back up in Greer – I really enjoyed this shortened version. Even though it’s a much larger elevation change – it’s so short that it’s very manageable with little ones. I felt the elevation gain a lot more than normal because of the higher elevation of the entire area. The starting point of this hike is around 9100 feet with an elevation gain of about 315 feet.

To get a look at the tower before the fire, you can visit the National Historic Lookout Register for a great image of it.

For more information on this trail – you can visit the Forest Service’s website at Apache-Sitgreaves National Forests – Indian Springs Trail #627.