South Mountain Park is a massive desert mountain preserve that is operated by the City of Phoenix. At over 16,000 acres and boasting approximately 51 miles of mixed use trails – it’s a great bet that you can find a trail you’ll enjoy. It’s hugely popular for horseback riding, hiking and mountain biking. Our family of five went for a hike a few weeks back and hiked only a fraction of the trails you’ll find there. 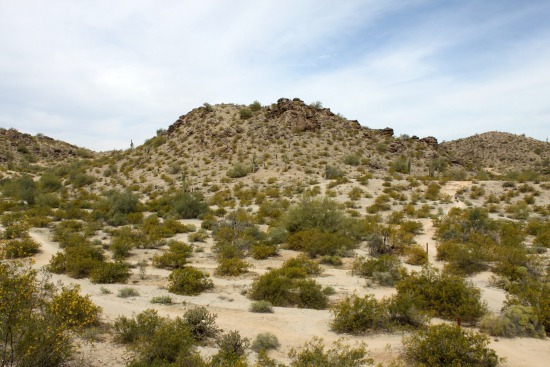 My husband has been to the park to go mountain biking several times, but this was the first time we’d brought the kids down for a hike. We went on a Friday morning and I was surprised by how crowded it was even for a weekday. On the weekends, the shorter family-friendly trails tend to get very crowded, but the longer trails are a bit less heavily used. Apparently, the weekdays can be crowded too so if you’re heading down there – go early.

The park is also a popular site for mountain bike races and some of the roads into the park will be closed to the general public intermittently for these events.

There is no entrance fee for this park and dogs are allowed on leash (and with poop bags in tow). In the summer months it is VERY hot and dry with little to no shade available. I would definitely recommend hiking early in the morning or late in the evening in the summer months. We went in mid-March and it was a bit toasty even then (highs in the 80’s).

I recommend getting an idea of what trail(s) you plan to hike before you go. There is a really great page on the City of Phoenix Parks and Rec site with the complete list including difficulties and lengths of all the trails. You can find that here.

We opted to enter the park via the Pima Canyon Entrance because it was closer to the trails we wanted to hike on (and in the hopes that parking would be easier since Pima Canyon is the smaller of the two entrances.) This entrance has a small parking lot at the trailhead, but parking is also allowed on the side of Pima Canyon Road as you drive up to the parking lot. There is a small restroom and a ramada picnic area. 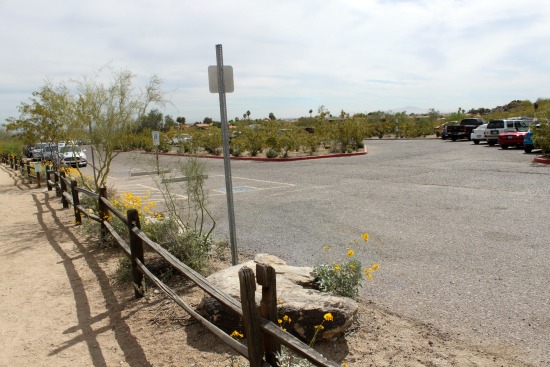 As you begin the hike from the Pima Canyon trailhead – to the right you can see the gorgeous, raw desert landscape, but to the left – the trail is nestled right up next to a neighborhood. I didn’t love how clearly you could see into the neighborhood. As you hike further into the park – the trail doesn’t run quite so close to the subdivision.

As we were hiking – from a distance I could see rock art on some of the boulders next to the trail. At first, I figured it was graffiti, but I later learned that most of the rock art you see on trails such as the Desert Classic, Mormon Trail, Telegraph Pass, Kiwanis Trail, Holbert Trail, and Mormon Loop Trail are actually Hohokam rock art. The Hohokam were a people who resided in central and southern Arizona from approximately 450 to 1450 AD. While they didn’t live in the South Mountains – they hunted, gathered, gardened, and conducted ceremonies there. 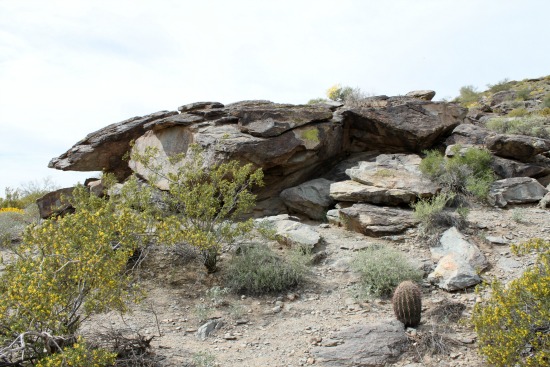 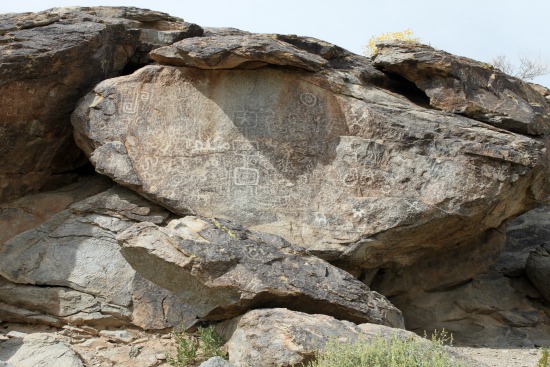 As you can see from the picture below – this part of the Desert Classic Trail is wide, flat, and sandy. Great for young hikers and mountain bikes. 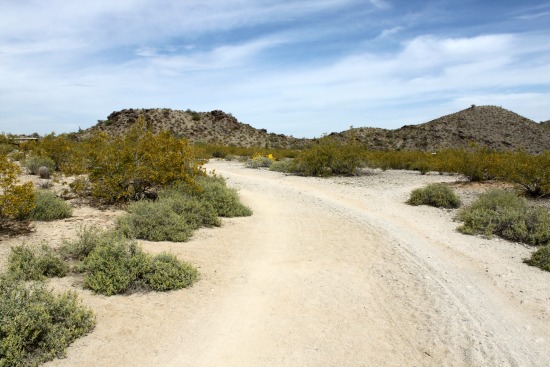 We lucked out because there was a ton of gorgeous little chollas blooming right off the trail. 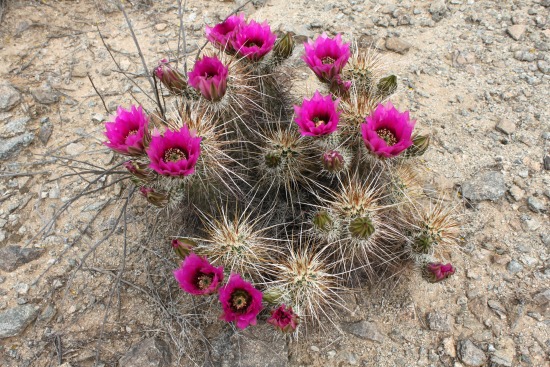 The trail signage is a bit sparse (more on that later), but when you do see a sign – they look like this (DC for Desert Classic.) 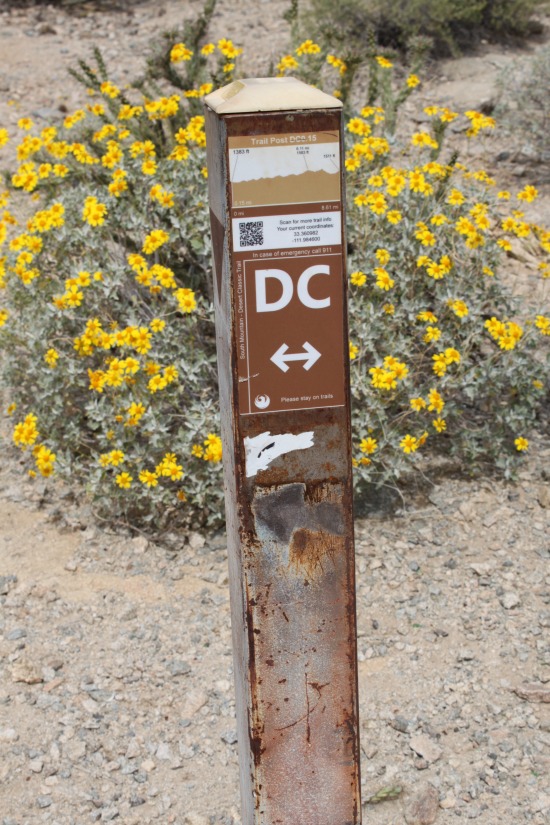 The Desert Classic is a straight shot for some time – then it turns and begins a slight ascent.  Here’s a shot of the turn with a whole lot of beautiful yellow brittlebush. 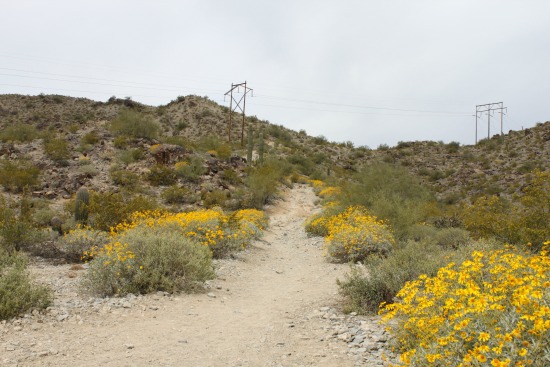 Here’s another shot where you’re looking back on that neighborhood I mentioned earlier. 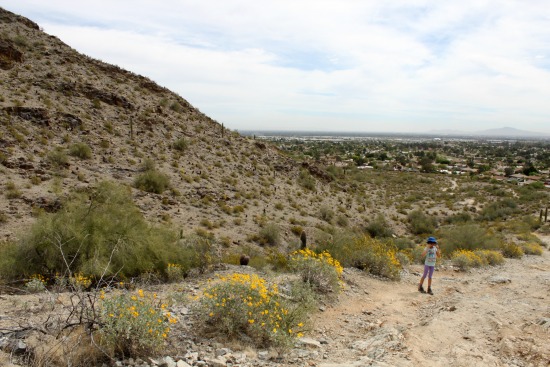 And further on down the trail – this is well past the initial ascent. I loved it out here – suddenly you feel like you’re in the middle of the wild (if you can ignore the power lines.) 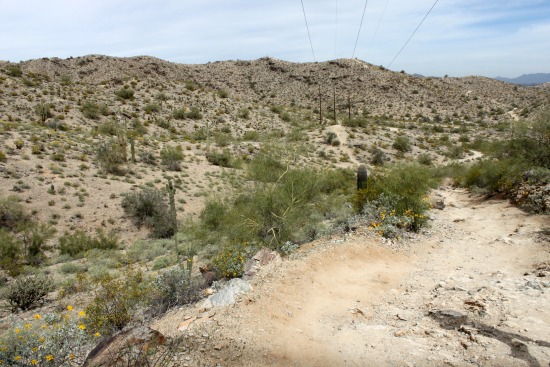 The trail was really relaxing to this point. It had just enough up and down to make it interesting, but not too hard for kids. At the top of the hill was where we jumped off of Desert Classic and onto Beverly Canyon Trail. 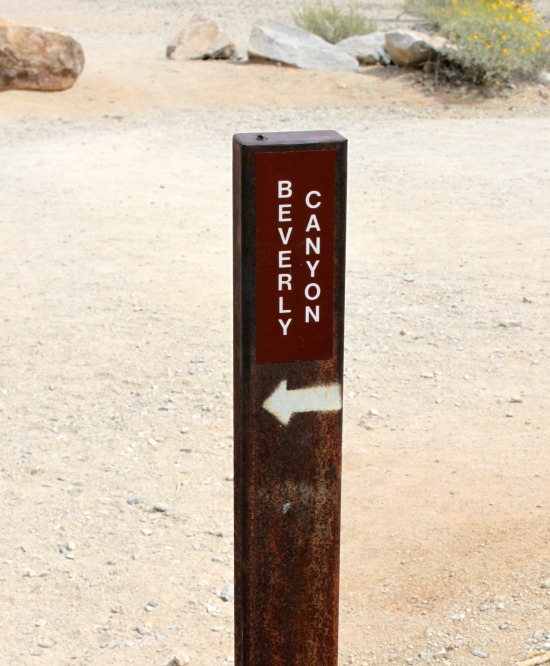 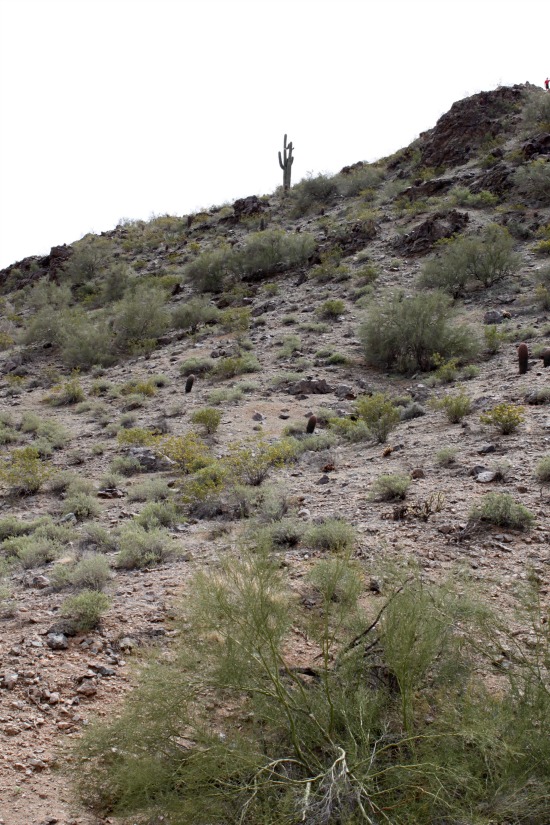 At one point, a little desert squirrel ran across our path. I snapped a picture of it just in time before it ran away. South Mountain Park is home to a lot of wildlife, but we only saw the squirrel and some birds. I was happy not to make the acquaintance of one of the many rattlesnakes that live there. 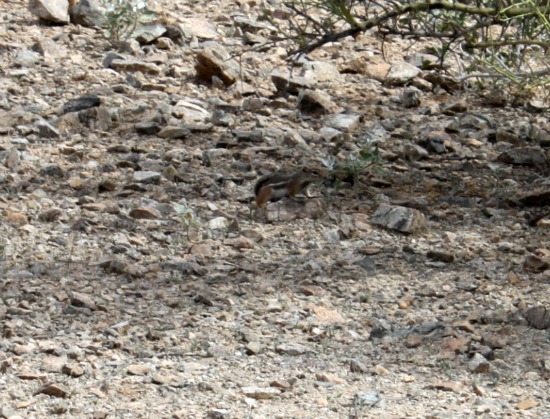 The plan was to do a short day of hiking because we were road tripping up north the following day to do some hiking. Remember how I said that sometimes the trail markers were easy to miss? Our intent was to hop onto Pima West Loop Trail and back to the parking lot. However, we ended up on Pima East Loop Trail and took a slightly longer hike than we meant to. We got confused because of the brown sign posts (with no signs) that are in place that will soon mark a new trail called East Boundary Trail.

Suffice it to say that bringing a paper map with you is always a good idea! We made a rookie mistake and left it in the car – luckily we ran into a very nice mountain biker who was familiar with the area and he pointed us in the right direction. 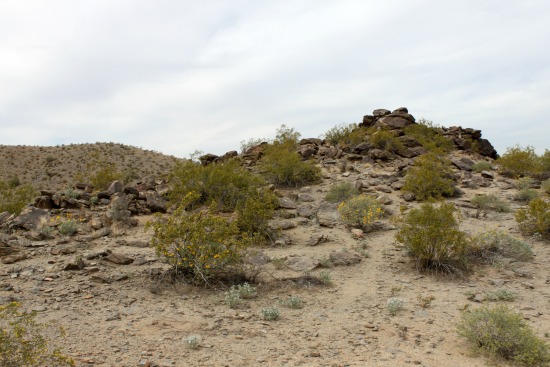 Even though we took an unexpectedly long hike – we had fun. South Mountain Park is simply gorgeous!