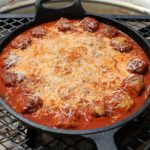 My family loves spaghetti and meatballs, but to take it camping just seemed like such a hassle. Between boiling the pasta and cooking the sauce and meatballs – it was just too much work for camping (and too many dishes to clean!) Until I discovered that you can do it all in one skillet! I […]

I really love steak kebabs. There’s something so satisfying about cooking your food on a stick (probably why I think camp cooking is so fun!) Plus I like how easy they are. Only one quick cooking step and your entire meal is ready. The real secret to great kebabs is a big variety of veggies […]

Nothing says camping mornings quite like corned beef hash to me. Growing up it was one of the things we had always had camping, but rarely at home. So when I smell it – I think of being in the forest and I swear I can smell the campfire. Now that I have a family […] 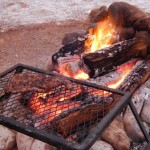 Campfire fajitas are one of the easiest dinners to make when camping out, with a little preparation before you leave. I usually chop up the vegetables (excluding the avocado) and cheese and put them in some ziploc bags, as well as pre-mix the marinade and put it into a covered bowl. That way all you […]