I’m addicted to caffeine. If I don’t have my coffee in the morning, it takes me till about lunch time to be any use to anybody. There’s nothing better than drinking a hot cup of coffee while watching the sunrise after a night out camping.

What I don’t want to do is tote a coffee percolator or french press with me on a long hike or backpacking trip. I generally bring my little cook pot with me when I’m out, so the simple solution is making a little Cowboy Coffee.

People tend to say “ewww, there’s coffee grounds in it,” but if you just let it settle, then toss out the last tablespoon or so of every cup, you should be fine. If you don’t want anybody else drinking your Cowboy Coffee, tell them to keep their teeth closed like a strainer when they drink it, hopefully it’ll scare em away and they’ll just drink water. You’ll get it all to yourself and have a chance to look like a true tough-guy outdoorsman. 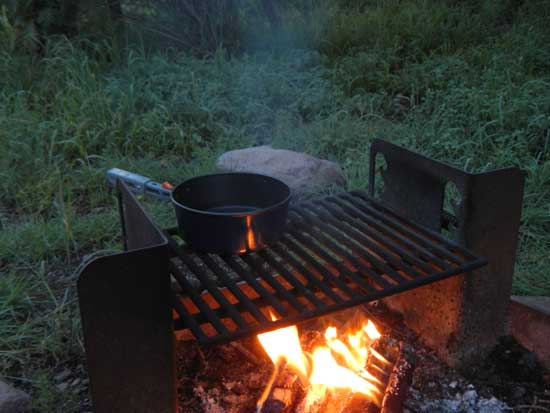 Some people recommend splashing some cold water in it to make the grounds settle to the bottom. That’s probably unnecessary. Just let it sit for about five minutes and they’ll settle on their own. No sense in making your coffee any cooler than than you have to.

Just keep your pan close to the fire to keep your coffee hot until you’re done drinking it. Don’t bring it back to a boil in the fire though, it’ll end up making your coffee taste bitter. 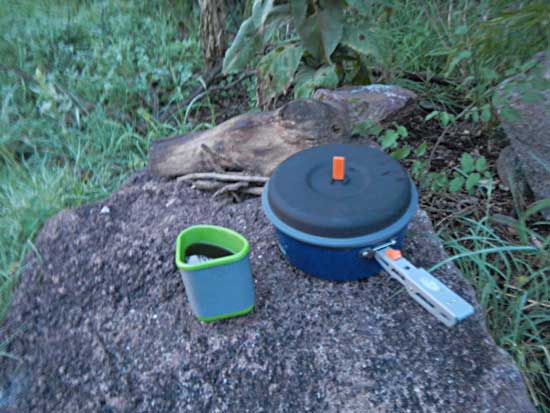 Some people recommend tossing some eggshells in your Cowboy Coffee.

If you’re cooking eggs for your breakfast, you might give it a try. Just be sure that you don’t end up drinking any of the egg shells. Try not to crunch them up too small, and toss out the smaller pieces.